A quick guide to unlocking every character in the Darkstalkers series, as well as highlighting which characters are available where.

Note: Night Warriors/Vampire Hunter does not have any hidden characters.

Before attempting this, make sure that you have the “Huitzil/Phobos & Pyron Enabled” option enabled in EX settings, otherwise it won’t work. 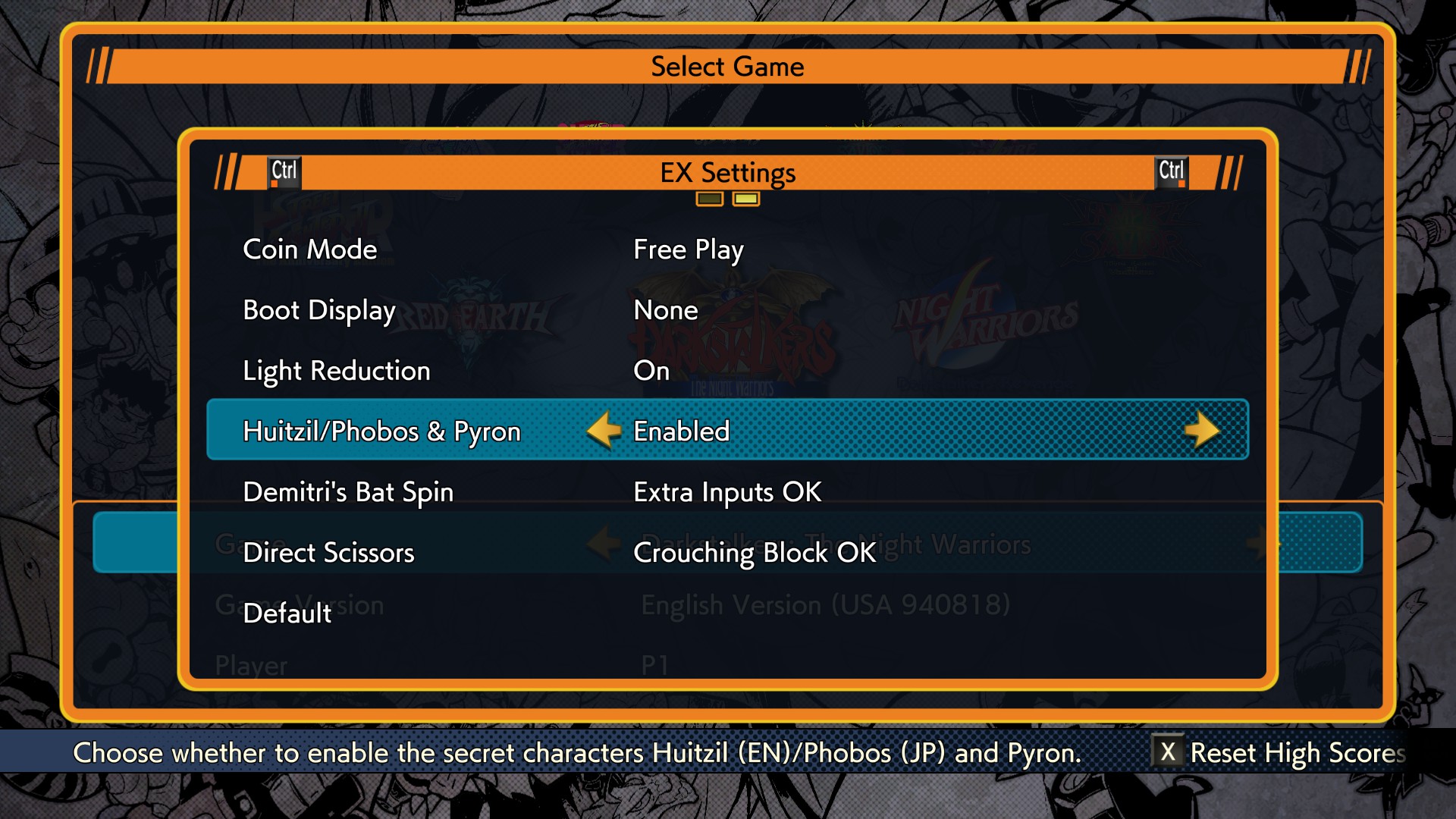 To select Huitzil/Phobos: Highlight Demitri and press Up or highlight Anakaris and press Down


To select Pyron: Same thing as Huitizil but scroll right from it 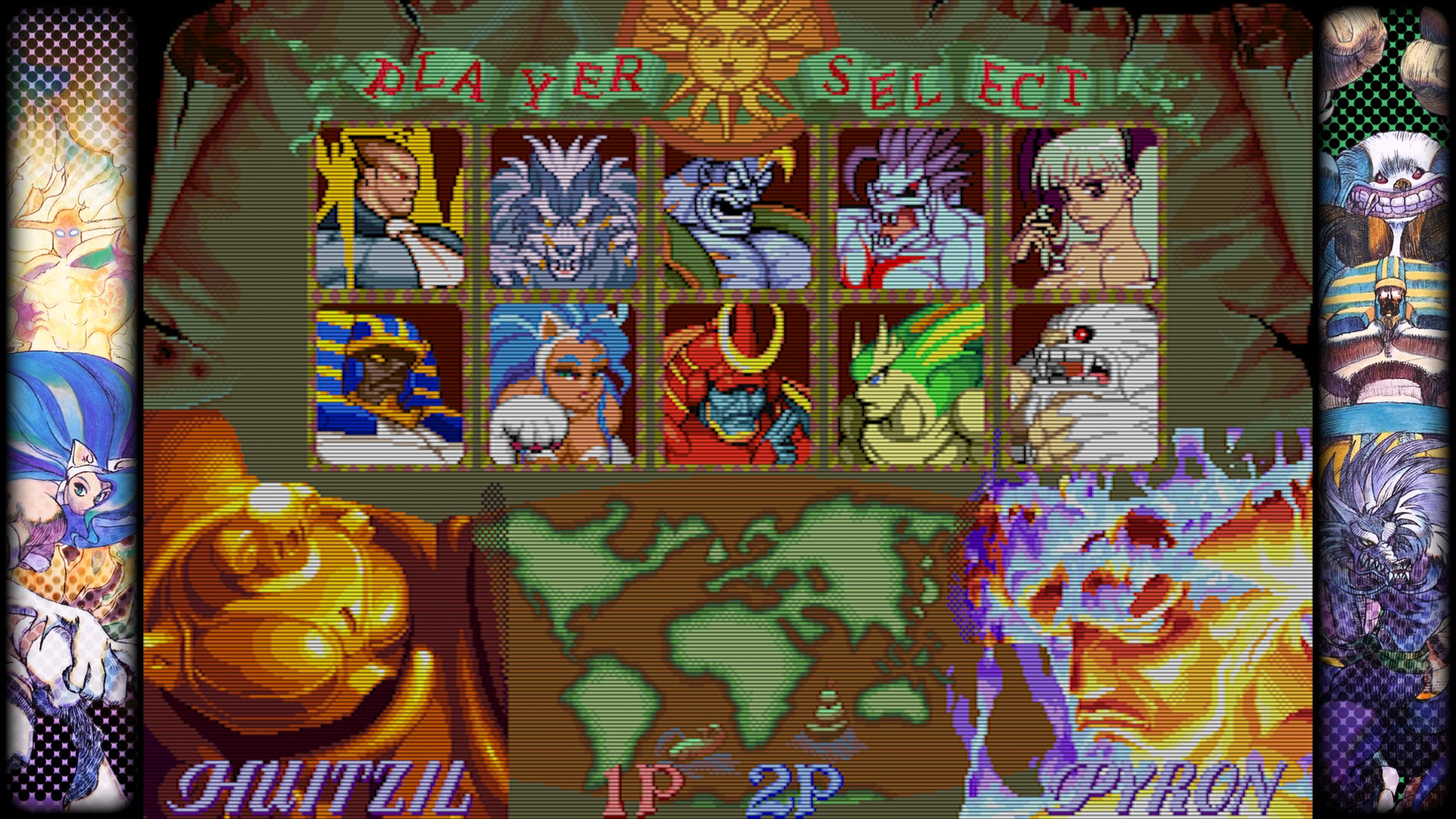 I am aware that there is already a guide on how to unlock Shadow and Marionette, but for the sake of finality, I’ll also include them here, specially since I added additional details.


I also took the liberty of highlighting which characters are available in which game.


Differences: Dark Talbain doesn’t really have any notable gameplay changes, it’s essentially a skin that makes him red and makes his body flicker, as well as giving him a different intro and changing the sprite of one of his supers into the one from Night Warriors/Vampire Hunter: Darkstalker’s Revenge. 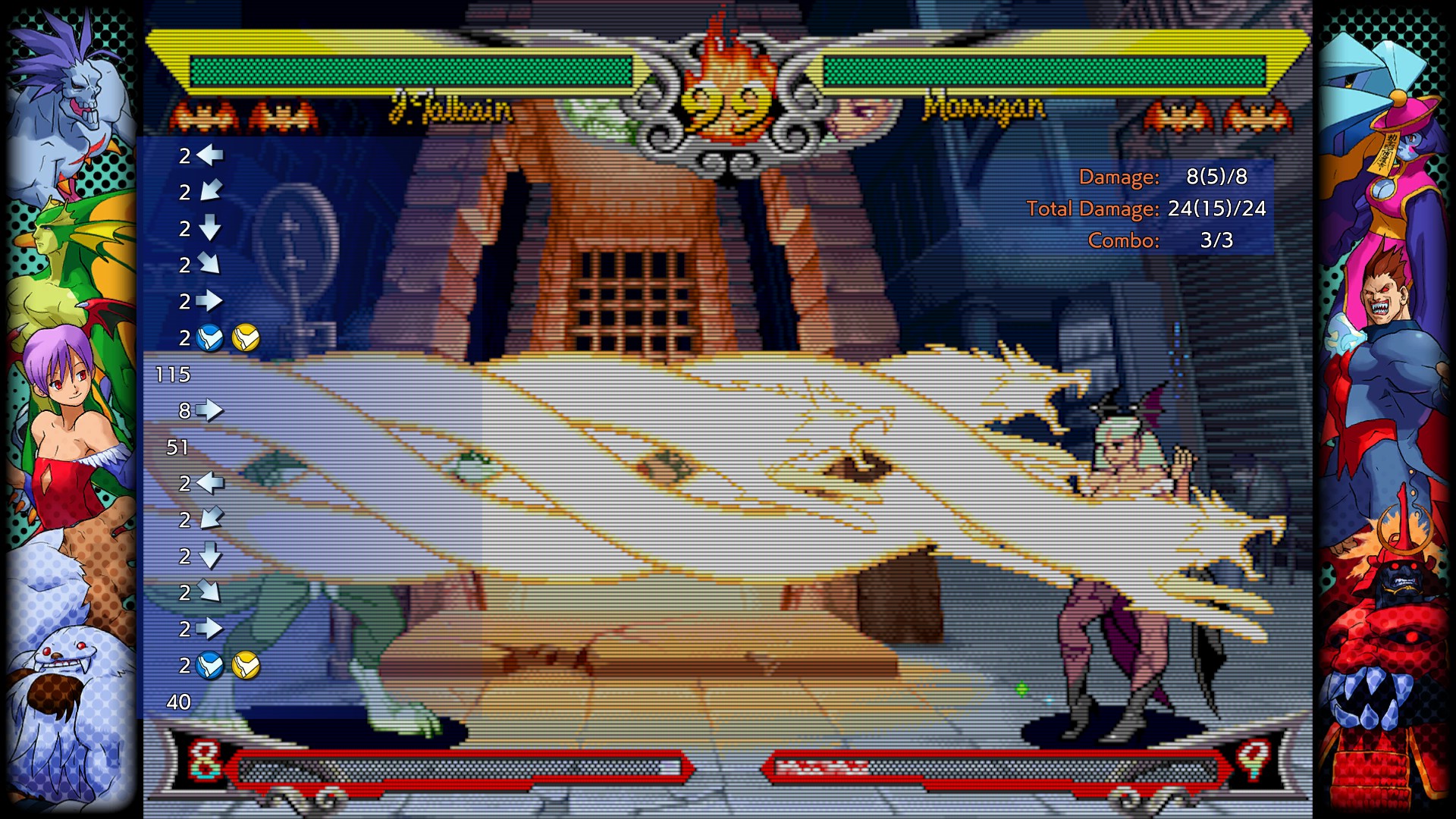 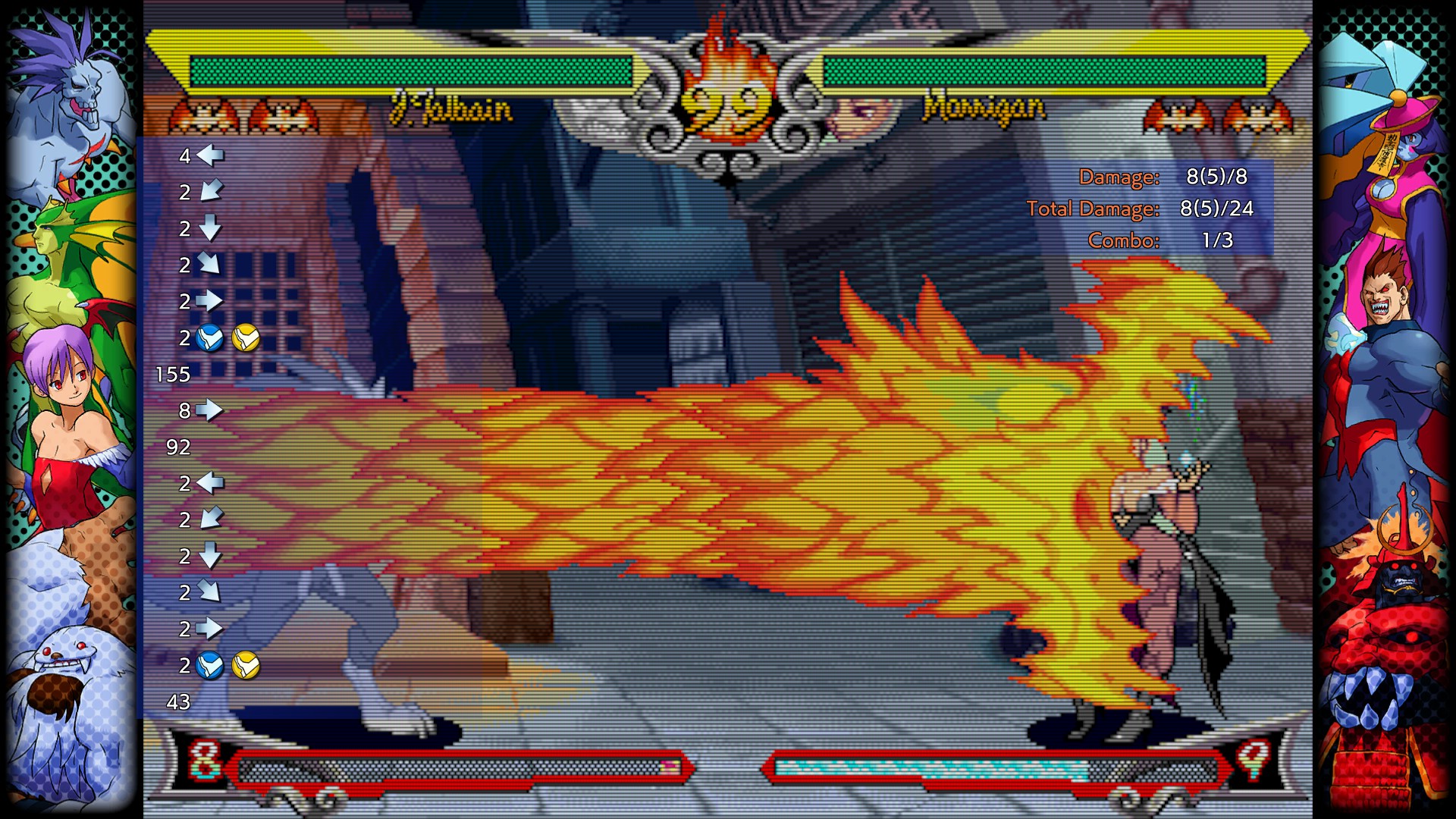 
Note: Dark Talbain is only available in the original Vampire Savior

To select Oboro Bishamon: Highlight Bishamon and hold Start, then press 3 Punch buttons simultaneously, or 3 Kicks for the alternate colour.


Differences: He regains some of his old moves, as well as being supplied new ones, like a new command grab, while losing the soul based special move regular Bishamon has (and you’ll notice in gameplay that he doesn’t have them floating around himself) and he has some new intros and victory poses as well.


You can also fight against him as a special boss. In order to do so, you have to: Not select “auto mode”; not lose a single round and defeat two opponents with a specific EX move. When you achieve that, defeat the final boss and afterwards, you will fight Oboro Bishamon. 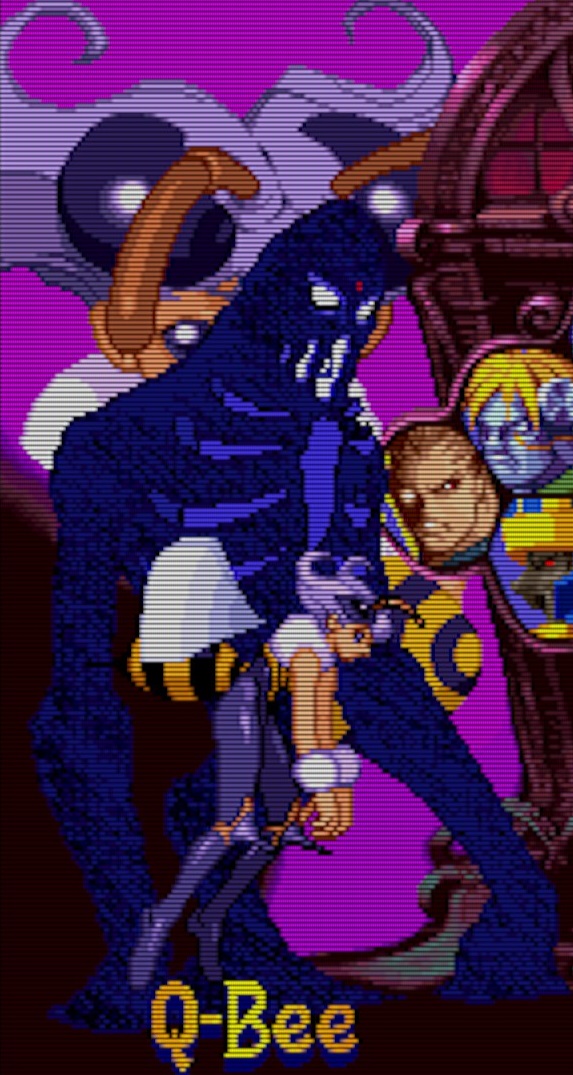 To select Shadow: Highlight the Random Select button and press start 5 times, then press any Punch or Kick button, if done right, you will be assigned a random character with Shadow looming behind him or her.


As you may be able to tell from the description and the picture, Shadow isn’t a regular character. You will be playing as a random character when you first select him, and afterwards, he will leave the body he was using and possess your opponent’s. On the victory screen, he has his own theme and will briefly flash the victory portrait of your defeated opponent. On the Score Ranking, he won’t have his name displayed, and instead will have a question mark in it’s place.


Note: In the original Vampire Savior, he only has one colour, but in Vampire Savior 2 and Hunter 2, he has several options, like the rest of the cast.

To select Marionette: Highlight the Random Select and press Start 7 times, then press any Punch or Kick Button. If done right, Marionette will come swinging upwards.


She’s similar to Shadow, in that she’s also a random select button of sorts, but instead of turning into your defeated opponent, she will copy your current opponent with a unique intro. On the victory screen, she has her own theme (which depending on the game has a happier or sadder tone) and will display a silhouette or your next opponent.


Note: Marionette is not availabe on the original Vampire Savior, only in Vampire Savior 2 and Vampire Hunter 2 and has multiple colours too.

Written by Katros; Ambassador of Vengeance

This is all about Capcom Fighting Collection – Guide how to unlock all character in the Darkstalkers Series; I hope you enjoy reading the Guide! If you feel like we should add more information or we forget/mistake, please let us know via commenting below, and thanks! See you soon!