You ever see those giant hands in The Orpheum and wonder how the hell you’re supposed to actually kill one to make Rags happy? I’mma give you some tips on how to slay your first Ungod!

So, why is it that one would be reckless enough to summon an Ungod?


There are 2 achievements tied to this absolute tank of a normal enemy. The first is in the Comedies section, granted to anyone who can actually kill an Ungod before it flees and live to tell the tale. The second is for sharing this accomplishment with Rags, who will then join your party.


I’m not kidding about this enemy being a tank. It has 100 HP, and you only have 3 turns to whack at it before it turns tail….er, arm? To make matters worse, it is capable of cursing your entire party, as well as fixing the health of all party members to the lowest HP amount in the group. One other annoying thing is that it can only produce purple pigment, which is fine if you have someone who can actually use it (or even change the pigment type), but that won’t always be the case.

How does one get an Ungod to appear in the first place?


One of the rarer enemy encounters in The Orpheum is a wriggling sack that hangs from a noose. It will usually appear with 2 or more enemies, and sometimes there will be multiple sacks present. To summon the Ungod, you must keep the sack alive until the sacrifice is accepted. Therefore, it’s better to focus on the other enemies first and foremost, especially any additional sacks. You do not want there to be more than 1 Ungod present unless you’re an absolute crazy person.

You’re probably wondering what I ended up using to pull off such a ridiculous feat. Well, here’s what my active party ended up looking like after the beast was slain: 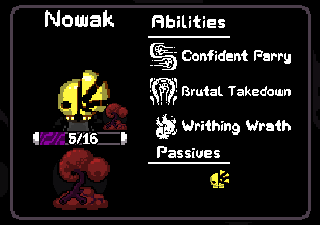 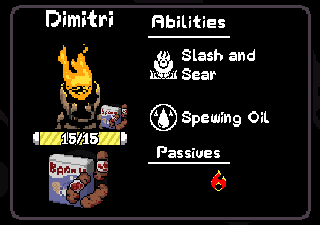 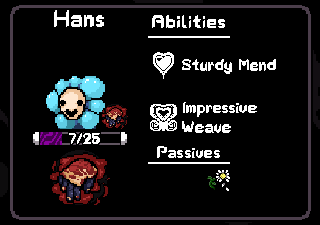 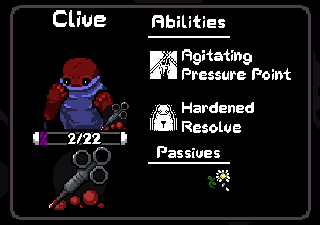 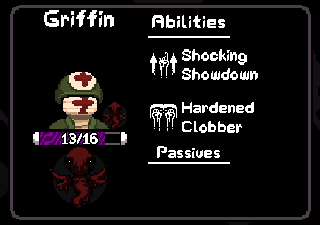 All party members were Level 2 except for Hans, who was Level 3.


First Born is already a pretty neat item, since it will automatically make the Ungod frail at the start of every round, but it’s even more amazing when Griffin’s spotlight is activated. You definitely want to make sure it’s active before the Ungod is summoned so that he can absolutely wail on it straight away. He must be the first party member to attack in order to get the most damage out of it, and that might mean using the wrong pigments a few times. However, as long as you can still heal him afterwards and keep him away from enemy damage, he should be fine.


Dimitri’s searing flames are always nice to have, since the Ungod tend to move around a bunch. Just make sure someone can put out the fire he leaves behind so you don’t waste too much health…


The reason I prioritized Hans over everyone else when leveling up is because her Level 3 weave skill is capable of healing the entire party (assuming she’s positioned in the middle). I also typically give her the max health increasing items whenever I find them, and I was lucky enough to get Soggy Bandages this time around. You gotta keep your main source of health regeneration alive somehow!


Clive is one of the tankier party members, so he is often being used as a meat shield in situations like this. Used Syringe does help to get extra pigments and damage when necessary, but it would’ve been more annoying to deal with if it wasn’t for Dried Paint sucking away the excess before it could hurt anyone.


I should also point out that I did have Stolen Gold in my inventory starting very early on, but for the sake of this specific battle not turning sour, I unequipped it. I actually could’ve leveled up my party further, but I was saving up the money in case I encountered Bimini in The Garden later. Sadly, that was not the case, but the extra money did help me defeat one of the final bosses for the first time.

As mentioned before, anyone who can utilize purple pigments could work for a battle like this. Pearl, for instance, can make stocky shields to mitigate damage. Longliver can do pretty good damage using only 1 purple pigment, as long as you’re willing to take damage in the process. I wouldn’t rely on the bleed-inducing skill refreshing his actions with something so time-sensitive.


Certificate of Exemption and All That Is Mortal allow party members to use any pigment for their abilities. However, the certificate will be destroyed if damage is received from other sources, and ATIM will prevent any healing.


Anton can scramble pigment colors so that there isn’t so much purple all the time.


While Trenchfoot does guarantee you gaining a blue pigment after each attack, it only works if there’s free slots for it.


Lump of Lamb can give you 2 Griffins! That’s double the potential for boosted damage, which could make the Ungod die even faster.


Gospel can also act like a second Griffin, being able to refresh Griffin using purple pigment if he’s directly left of the statue.


Blackened Toad sucks out all the purple pigments and exchanges them for damage on the Ungod. At 2HP a pop, that’s not a bad trade-off.

I hope you enjoy the Guide we share about Brutal Orchestra – Slaying An Ungod; if you think we forget to add or we should add more information, please let us know via commenting below! See you soon!