Some simple tips for this unussual map.

As someone had pointed out, there are a lot of Youtube video on how to open the gate…

But none of them actually DESCRIBE what to do. It took me over a hundred tries to figure out what you really need to do, and here it is:

I think the trick actually modeled after the idea of the two button on a nuclear sub that is intended to require two people to activate… it works like this:

There is a panel on the top and second one on the bottom (screenwise, not world-wise) of the Dam.

Although land monkeys can’t normally stand on the water or reach it, there are some exceptions.

My favorite is Adora. If you place her just about a 1/20th of the way down the damn, and right next to it, she can see the top and shoot there. It’s my favorite way of playing it, and it’s an easy to win build on Easy or Moderate (and I’ve done it easily on Impoppable too, but that was “cheating” because I used Double-Cash Mode.)

The Wizard Money can shoot up too. He needs to be at least 1xx to see up there, but if he’s not in a great spot, 4xx widens his range a lot so he has a lot more flexability.

Also, Snipers can stand on the little hill-tops on the Valley before it’s flooded and shoot in. As ussual, the red-area shows what can’t be seen.

Obviously Helicopter and Plans work too, but not I’m post off-topic for this section, because they’re not “Land Monkeys.” xD

Regardless of whether or not you open the damn, you can use Ice Moneys to free to water, which is great, because “frozen” water will accept EITHER boats (Pirate, Sub or Admiral) or land tower.(*)

Directions are below, but here’s one of my screenshots: 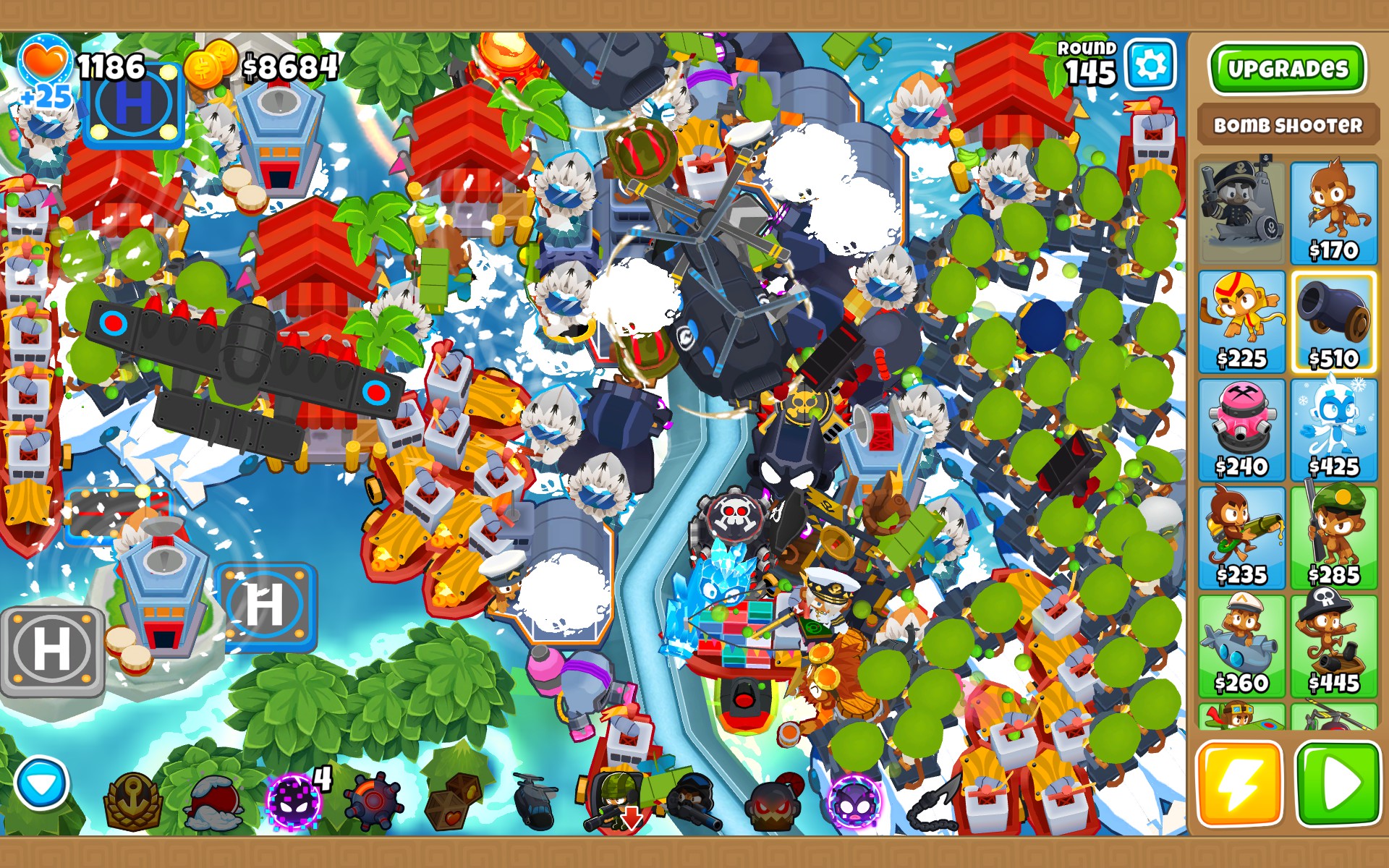 Of course you need to get the Ice Monkey up there first, and the Ice Monkey has to be (I think) a 03x or higher, ussually a 032, although the 042 and 052 give much bigger areas.

Then, more ice monkeys and stand on the frozen water and spread out.

But how do you get the first one up there?

Answer: You use a 5xx Privater (Pirate/Carrier). It has two places for the monkeys to stand.
There may be some trick to get helicopters to do it, but I’m not sure it will work here, or how.

Note: Once you have two Ice Monkeys keeping each other afloat, you can sell the one that originally put them there….

In other words, if you put an Ice Monkey on the 5xx Carriers’ special shelf, you can put a 2nd IM (Ice Monkey) on it’s frozen water, than a 3rd on the 2nds ice, and a 4th a bit farther away on the 3rd’s ice.

Cool thing is, at that point, you can sell the 1st and 2nd and the 3rd and 4th will still keep each other afloat.

What happens if you sell and Ice Monkey and nothing else is there to keep it’s land-Monkeys afloat? Automatic Sell-off. 🙂

* – Note: Pat Futsy and some other unexpected things can stand on water too. I forget to try to the screenshot shown, but vaguely remember it’s similar.

That up to you. Hopefully: Enjoy!

Note that if you have a xx4 and/or an xx5 Pirate, they will add to each other’s income, up to 20 times. So the revenue can be pretty huge (if you’re not playing Chimps or other no-income setting.)

Also, xx4 Farms also add income to the xx4 and xx5 Pirates, so the income can basicly go up geometrically!

Oh.. .and later one I might clean this up a bit. I should have included at least a screenshot of the unopened damn, and maybe some links to those Youtube guys that punch away at the buttons to open the dam (I’m guessing until the video gets too many fails) and then post the results when they get lucky and it opens. 🙂

This is all about Bloons TD 6 – Guide for Flooded Valley; I hope you enjoy reading the Guide! If you feel like we should add more information or we forget/mistake, please let us know via commenting below, and thanks! See you soon!