Hadum has set loose her black sun, glowing with hatred and destruction, upon the skies of Serendia, a world that is beginning to look like Hadum’s Elvia Realm.

Hadum, the goddess of despair who felled many lives in the western region and caused the great civil strife between Sylvia’s children, has come into this world yet again. She seeks Kamasylvia’s Light, rekindled by countless adventurers. Hadum has set loose her black sun, glowing with hatred and destruction, upon the skies of Serendia, a world that is beginning to look like Hadum’s Elvia Realm. Serendia is the first to fall prey to Hadum, and many of its inhabitants have lost themselves to rage under her dark influence.

* Some of the servers in Black Desert have fallen under Hadum’s influence. You can now face monsters tainted by Hadum in certain servers. 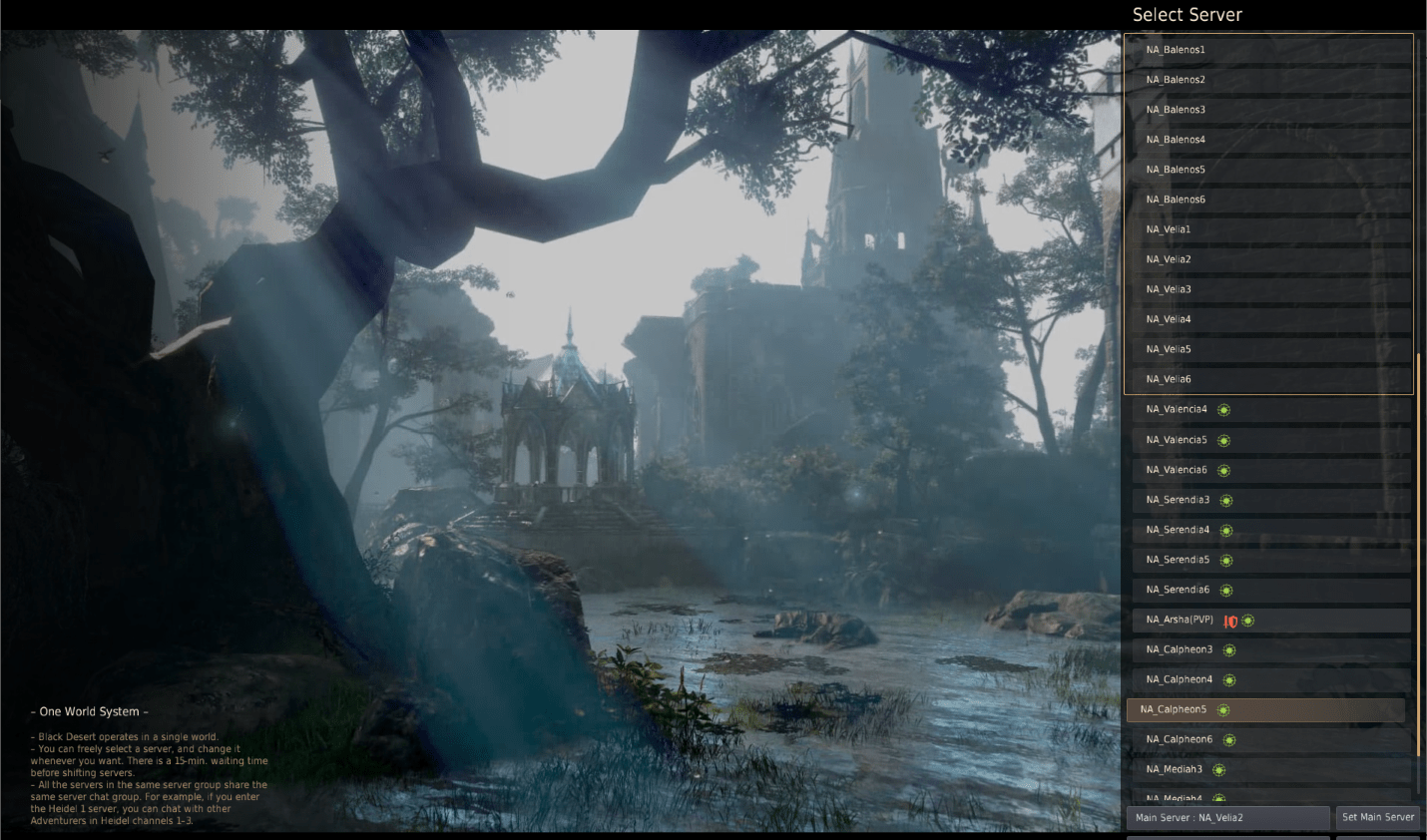 “Alert Levels” should be carefully heeded while venturing into Biraghi Den.
Bandits will put a bounty out for and raise alert levels against adventurers defeating monsters.
From this point on, adventurers will have to face additional waves of attacks from bandits.
There are five different stages of alert levels. You’ll face more enemies and diverse kinds of monsters as the alert level rises.

At stage 5, Biraghi himself will appear as a boss.
Defeating him will reset all alert levels.

If there is more than one adventurer in the same region, the adventurer with the highest alert level will be highlighted on the map. 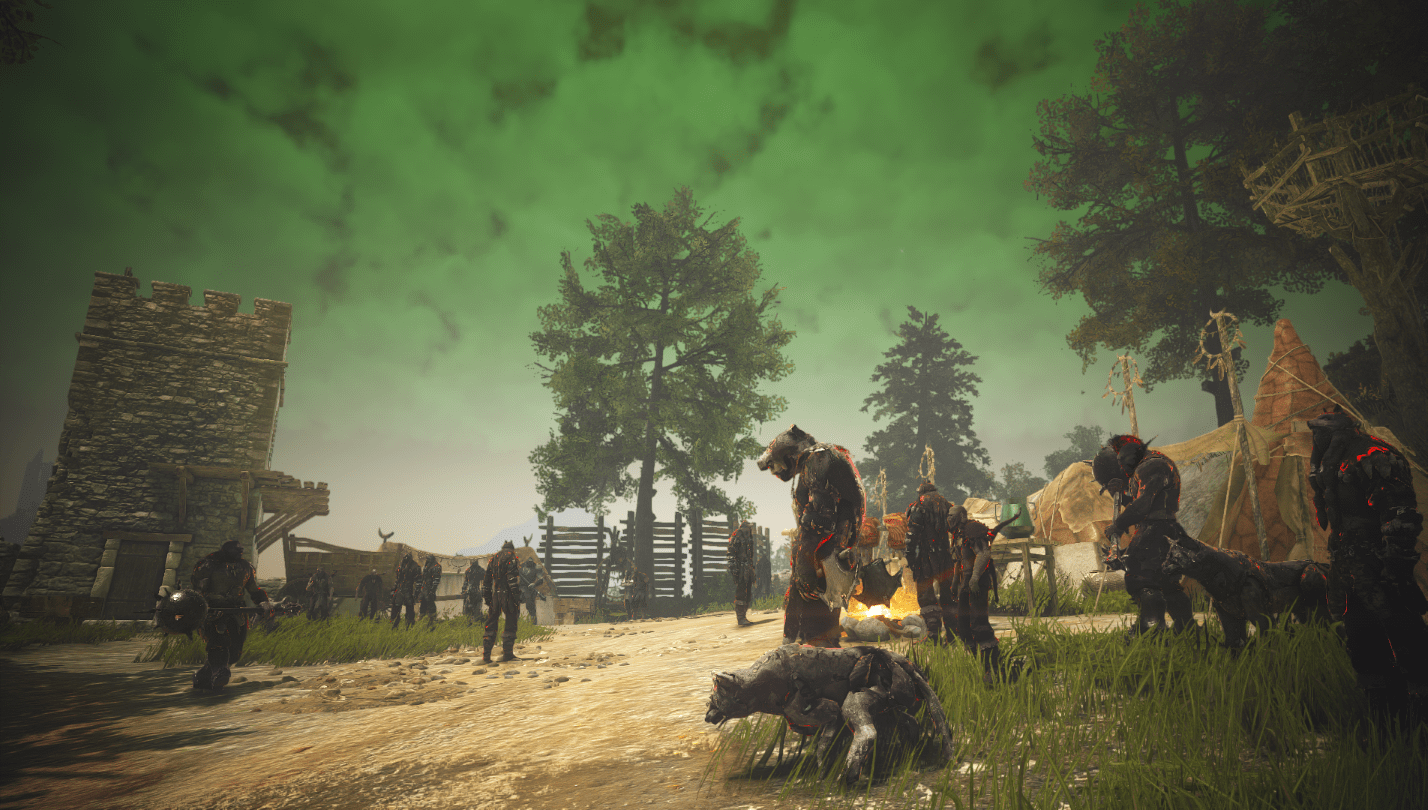 A party of two is needed for this quest. One must take up a position while the other lures monsters to said position.

Once you bring the elite monster near the Altar Imp Flag and defeat it, this power will transform nearby souls into Altar Imps and provide you with more loot.

There is a certain chance that Dastard Bheg will be summoned while you are defeating elite monsters near the Altar Imp Flag. 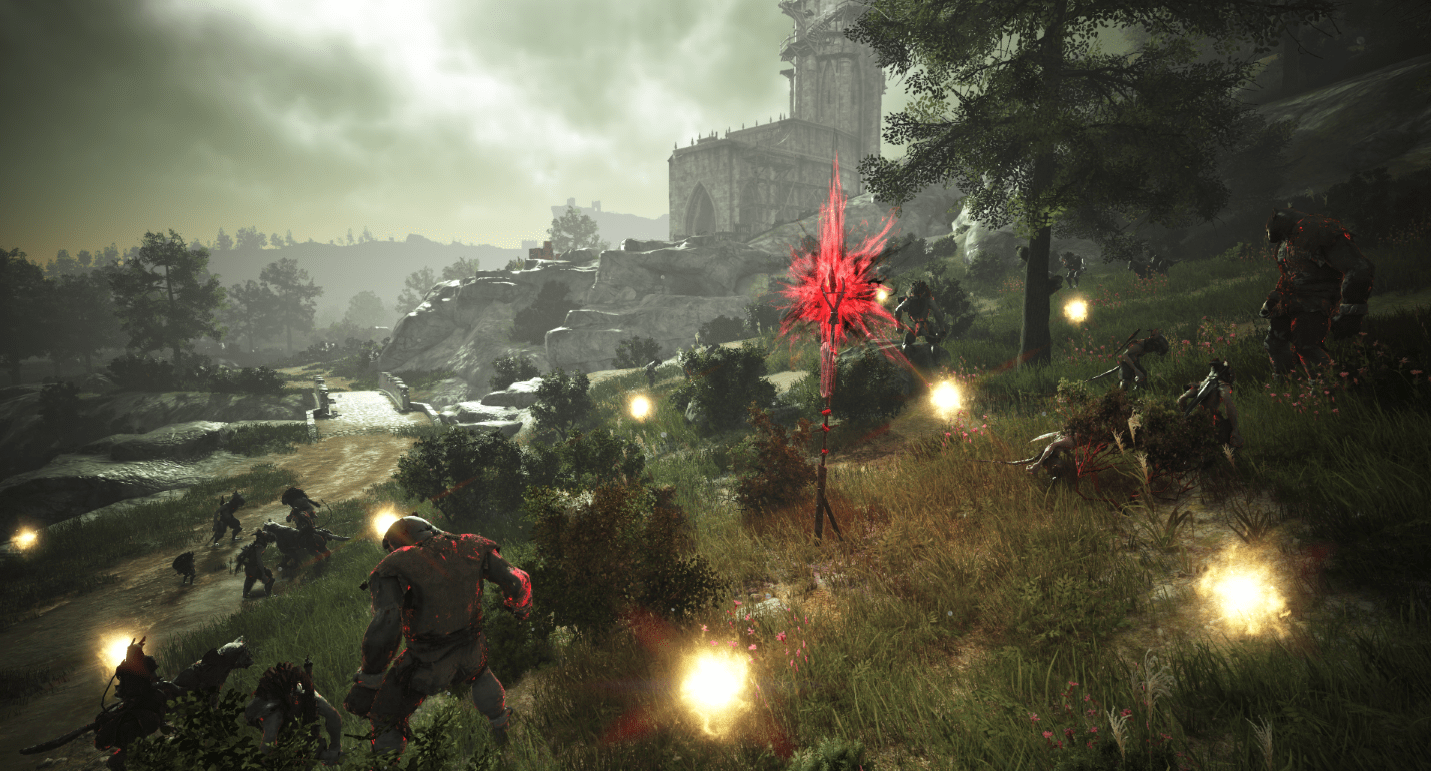 Titium will appear as a boss during the battle and Nagas, known rivals of Fogans, may appear from time to time to make things more difficult for adventurers. 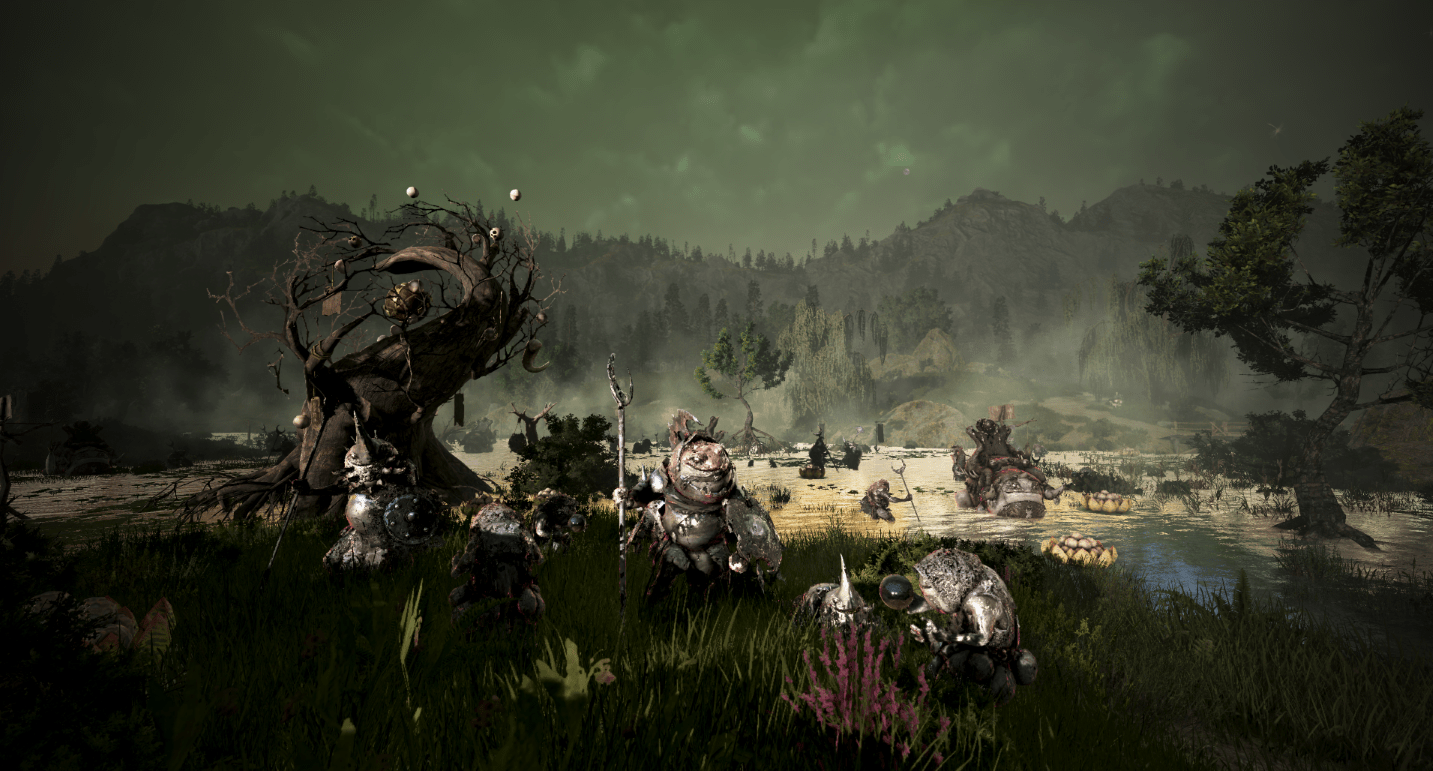 Once attacked, the Swamp Naga Commander will summon its minions to strike the adventurer.

Additionally, there are Poisonous Swamp Plants in the swamps that can be defeated to lower the defenses of nearby monsters.

These plants can inflict poison damage, so adventurers must carefully form a strategy on how to use them in battle. 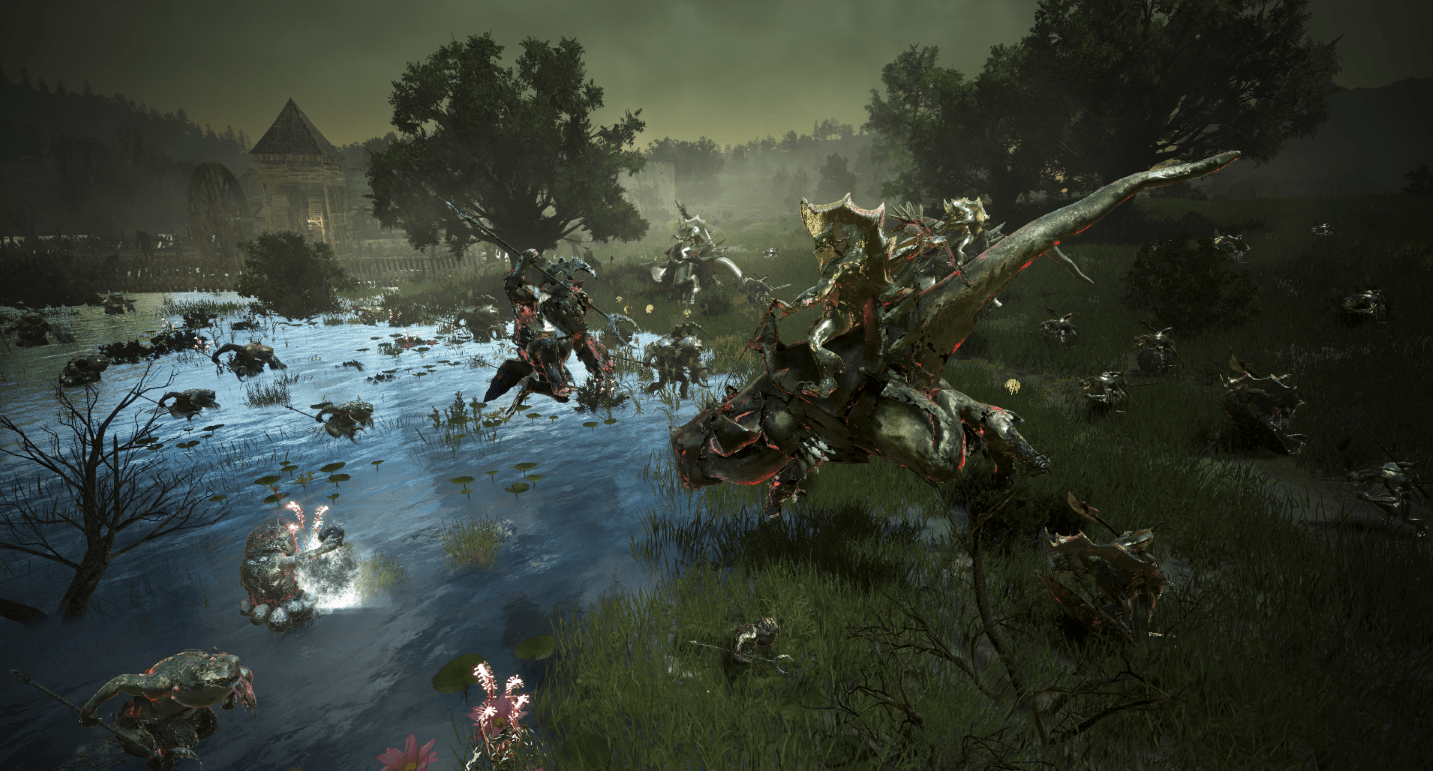 You can obtain “Al Rhundi Secret Order” by defeating monsters.
This item can be used at the Castle Ruins entrance to summon 15 elite monsters.
The goal here is to defeat 5 of them as fast as possible to summon Al Rhundi. 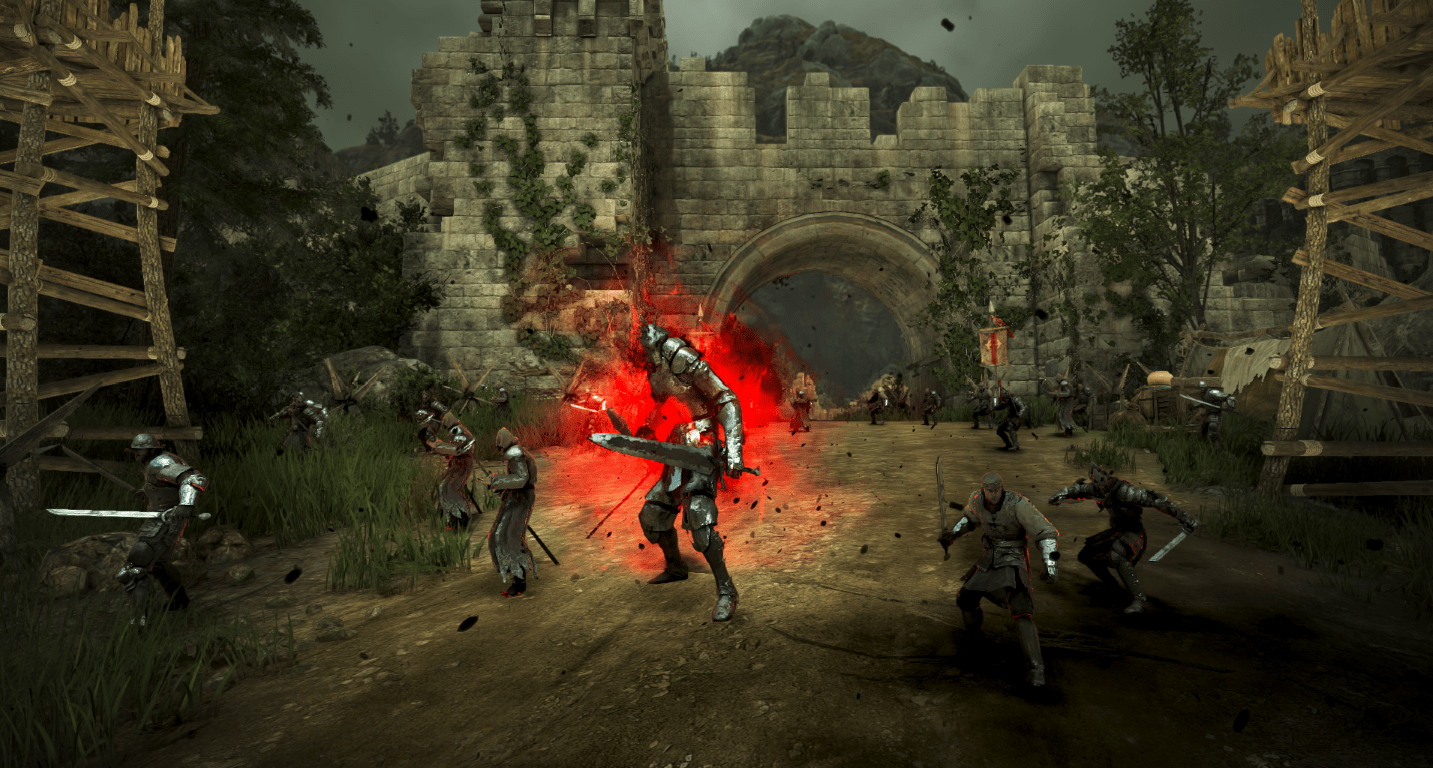 Red Orcs have become more powerful and normal attacks do not inflict heavy damage on them anymore.
To counter this, you have to make use of the Fairies of Light. Fairies of Light are imprisoned inside a cage.

But if you break them free, they’ll return the favor by creating a “Zone of Light”.
Red Orcs exposed to the “Zone of Light” will weaken in strength.
Activating more than 5 “Zone of Light” will trigger an enormous “Light Burst” that will immensely weaken the Red Orcs that are inside it.
You must focus on setting up these zones in a manner that best fits your strategy. 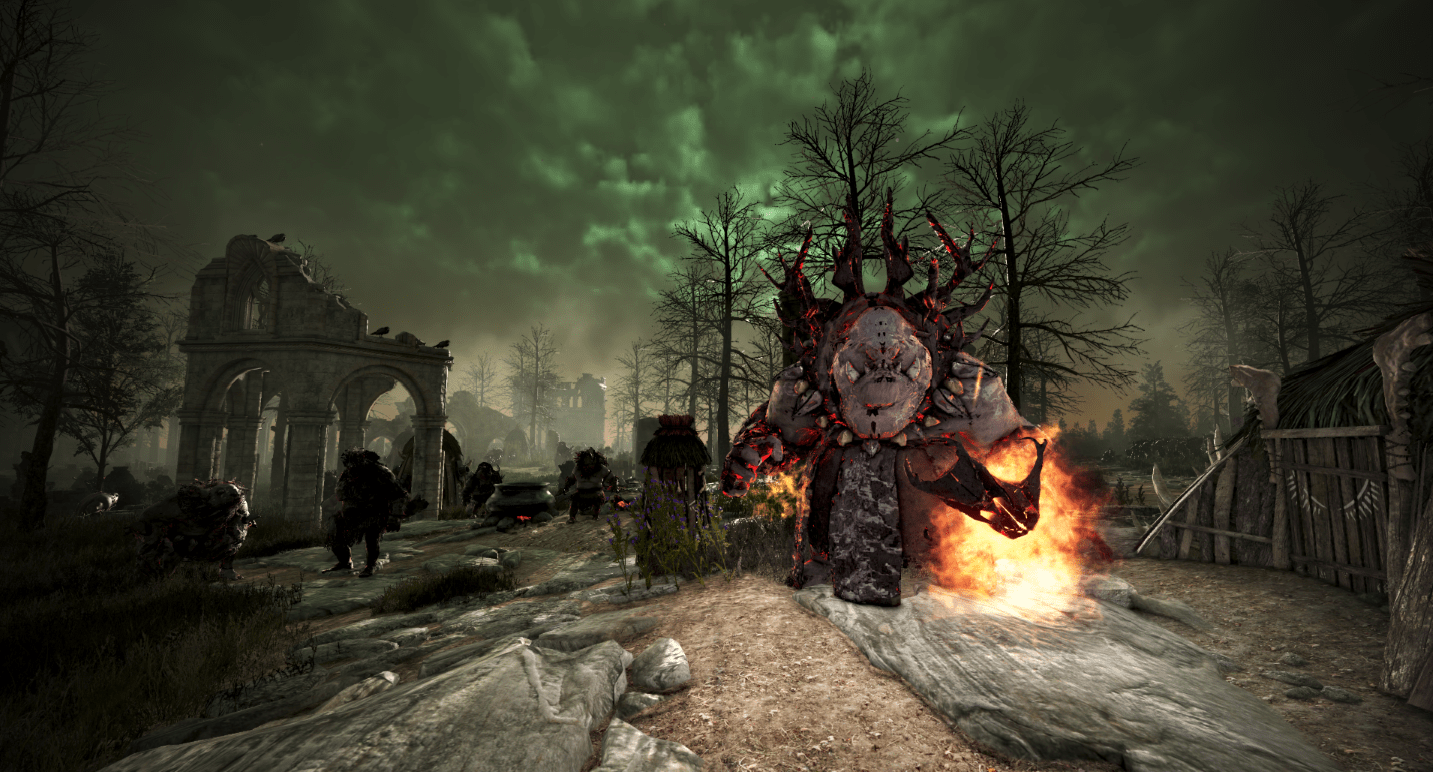 During combat, you have a certain chance to obtain a “Crimson Bell”.
Ringing the “Crimson Bell” will summon monsters from all directions. 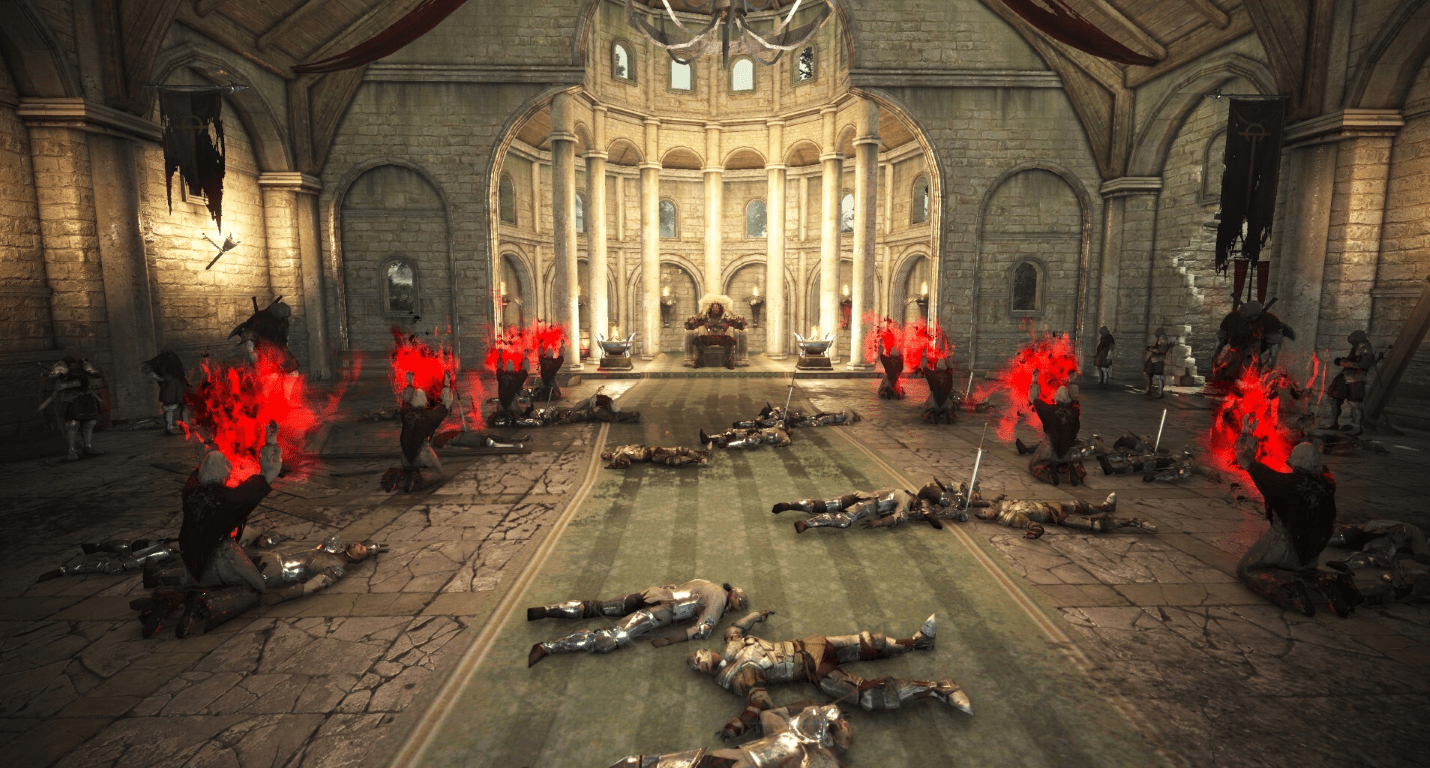 The three ancient spirits are Valtarra, Okiara, and Narc. They are attendants to Sylvia, the former ruler of Elvia realm. They disappeared as Sylvia was ousted from Elvia, but have begun to resurface in response to the energy of the adventurers who have jumped into the battlefield to stop the infestation of Hadum.

While defeating monsters in Hadum’s territory, young Valtarra, young Okiara, and young Narc will occasionally appear in the field in which adventurers will receive the lightning, fire, and water affinities. As you interact with these ancient spirits, you can choose and receive an Elvia Main Weapon or Elvia Awakening Weapon. These weapons can be used immediately upon receiving.

Elvia Main Weapons and Awakening Weapons will disappear 10 minutes after you get them. So, they can only be used within that allotted time. The weapons have a max durability of 100 and cannot be repaired.

Each Elvia Main Weapon and Awakening Weapon has its own distinct attribute, which may wield more power in certain situations. 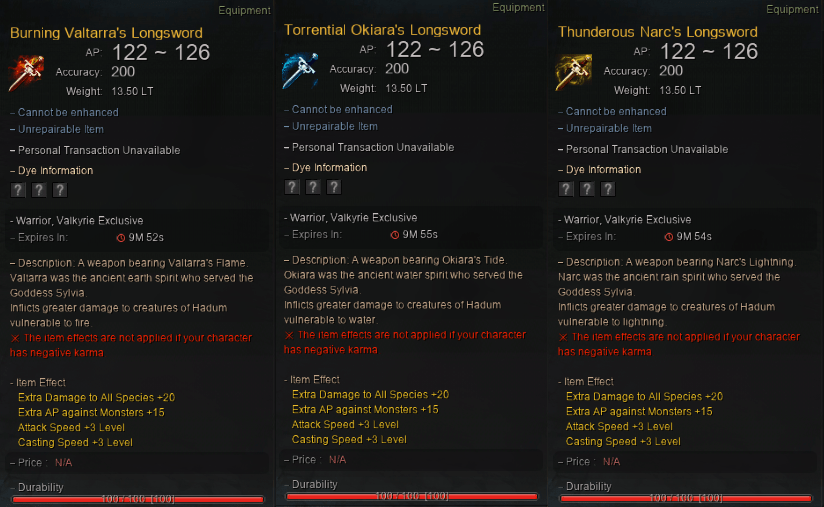 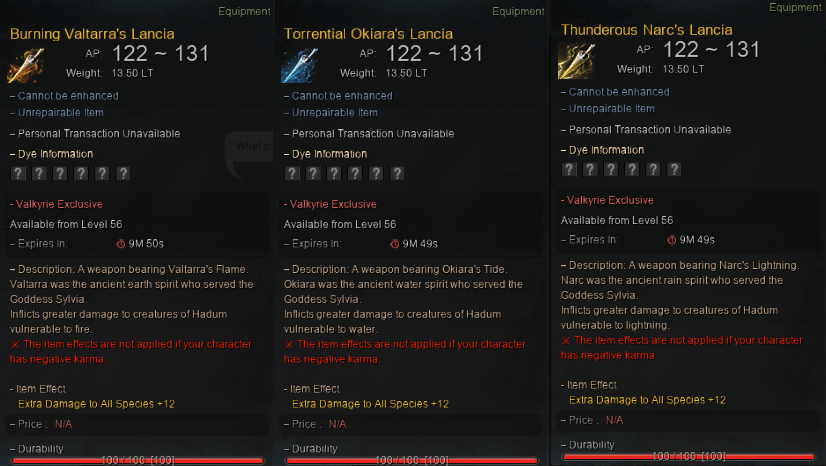 Every character has been given a special Elvia Skill, exclusive to their class. These Elvia skills can only be used while equipping an Elvia Awakening Weapon. 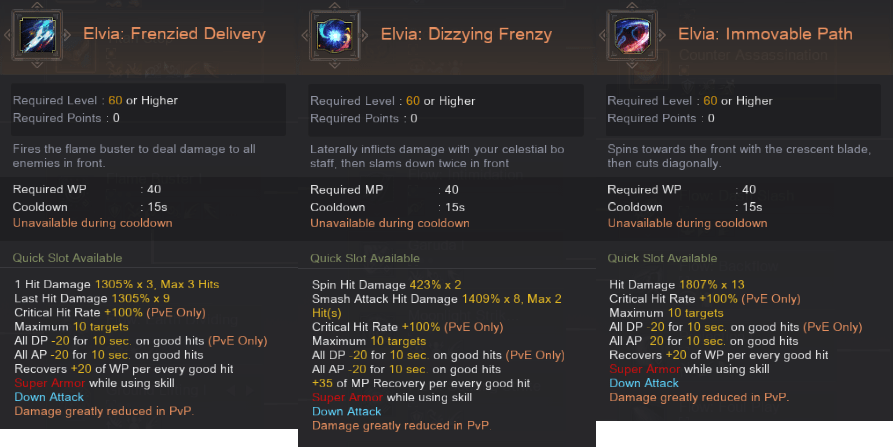 Each Blackstar defense gear (Helmet, Armor, Gloves) can be reformed once to unlock its potential.

You will need a very rare and special material called the “Obsidian Specter’s Energy” to reform Blackstar defense gear.

• Specter’s Energy can be looted from monsters all over Valencia, Kamasylvia, and Drieghan. Chances of obtaining it are better in Thornwood Forest in O’dyllita and Shultz Guard in Mediah.

You can obtain the following subsidiary materials from the places below: 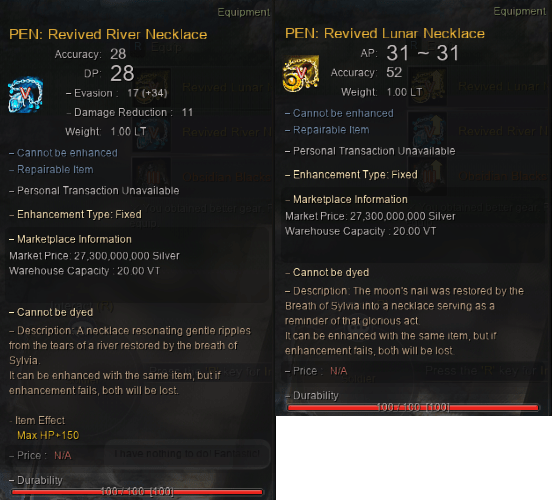 Accessory crafting formulas are as follows:

Put them together by placing them into a special arrangement in the inventory.

How to obtain the crafting materials:

There are 3 new items bestowed with special effects which can be obtained by reforming certain accessories. 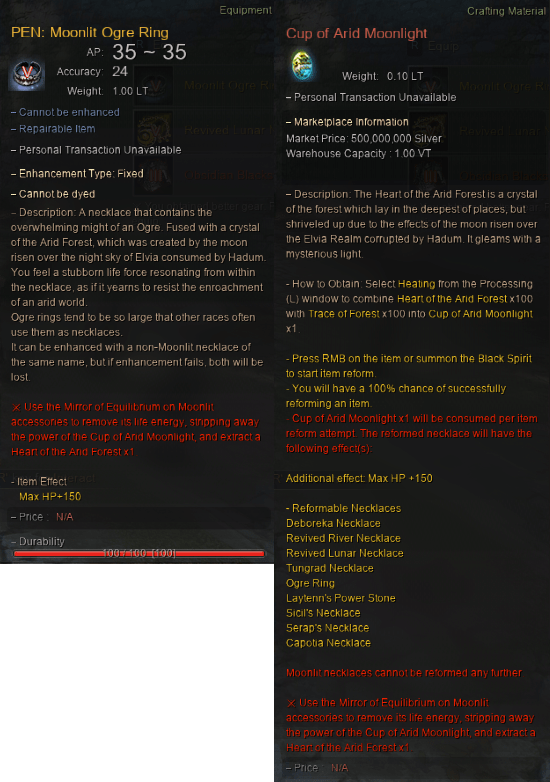 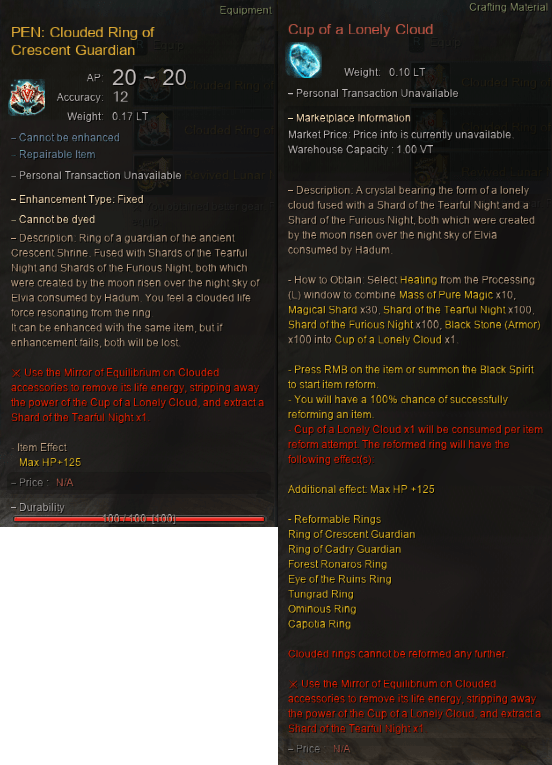 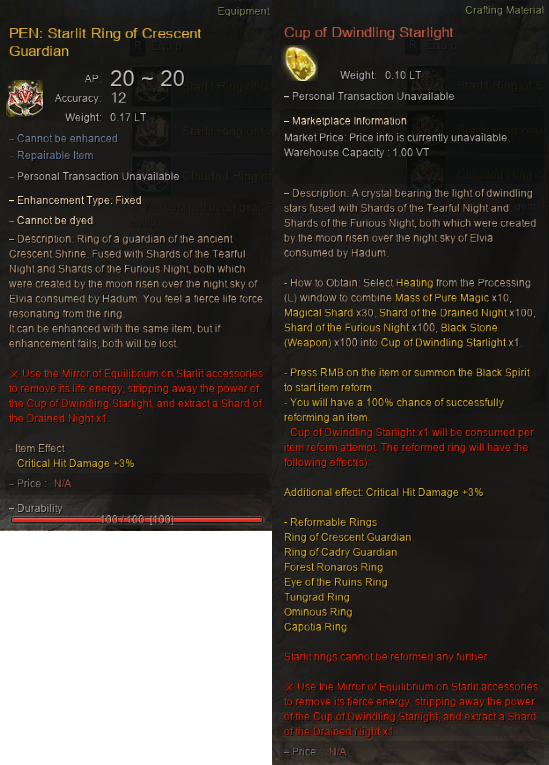 This is all about Black Desert Online – Elvia Realm; I hope you enjoy reading the Guide! If you feel like we should add more information or we forget/mistake, please let us know via commenting below, and thanks! See you soon!