A small checklist for new players who are nervous about Augmenting for the first time.

Making the most of Augmentations

It may seem daunting at first, but as you progress in the game, installing augmentations will barely be considered the setback. You’ll want to be strategic though.

What gets reset, and what does not 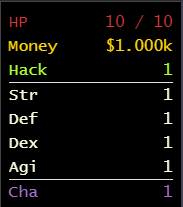 Getting back up and running again

A couple other tips

I hope you enjoy the Guide we share about Bitburner – Augmentations Checklist Guide; if you think we forget to add or we should add more information, please let us know via commenting below! See you soon!