Once loading into Battle Cry of Freedom, some might find it hard to see how to customize their soldier and his uniforms for the many regiments that are featured in the game. In this guide I will walk you through on how to customize your soldier.

How to find you Ingame Profile

In order to customize your soldier and his uniform once you arrive on the game’s main menu. Click on Profile, which is right of Play. 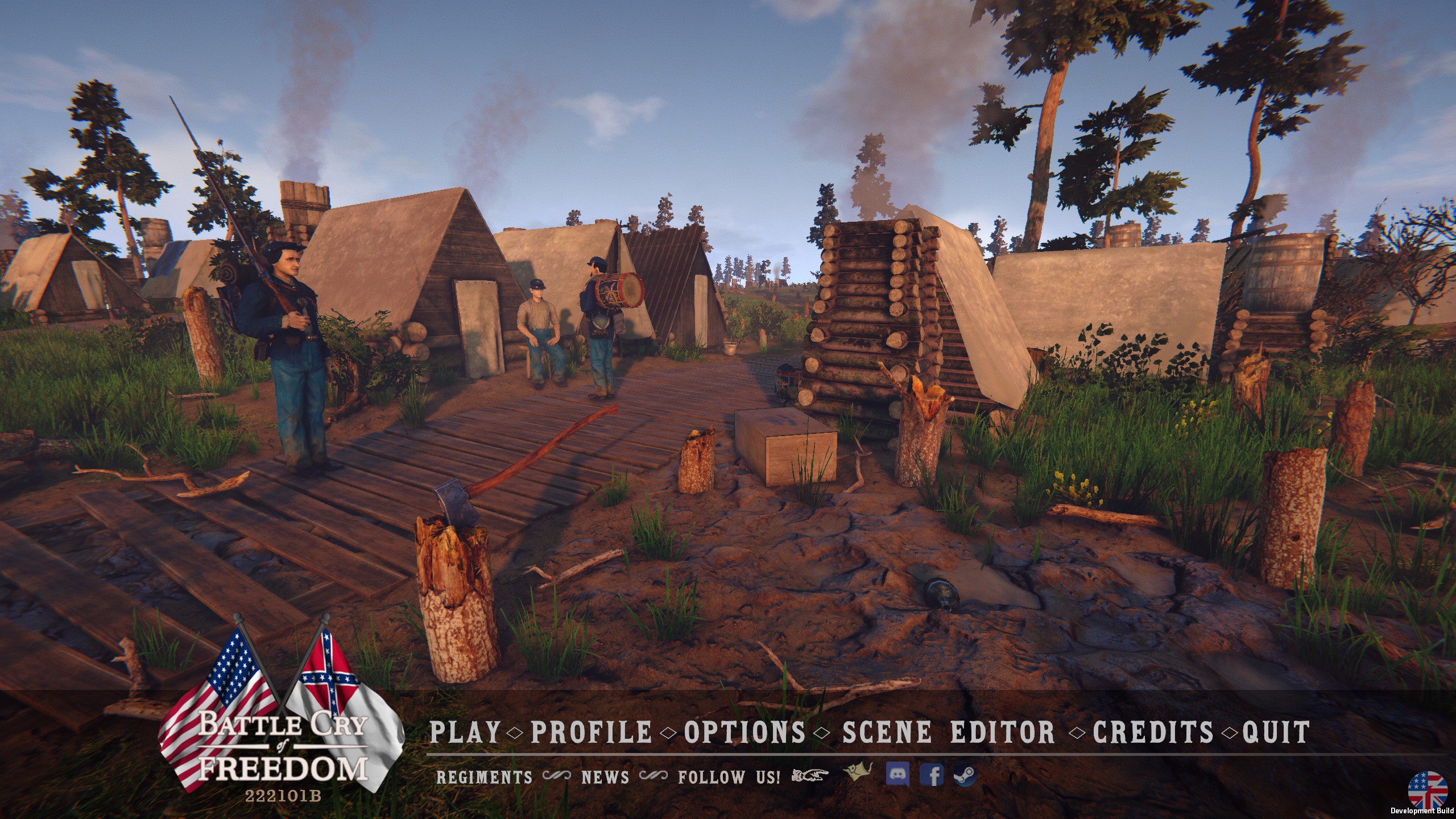 
In the name bar, you can type out whatever name and tags you want to have on your soldier while in game, once you submit your name by pressing enter, any space will be replaced with an underscore. The max character count for a name is 25 characters, 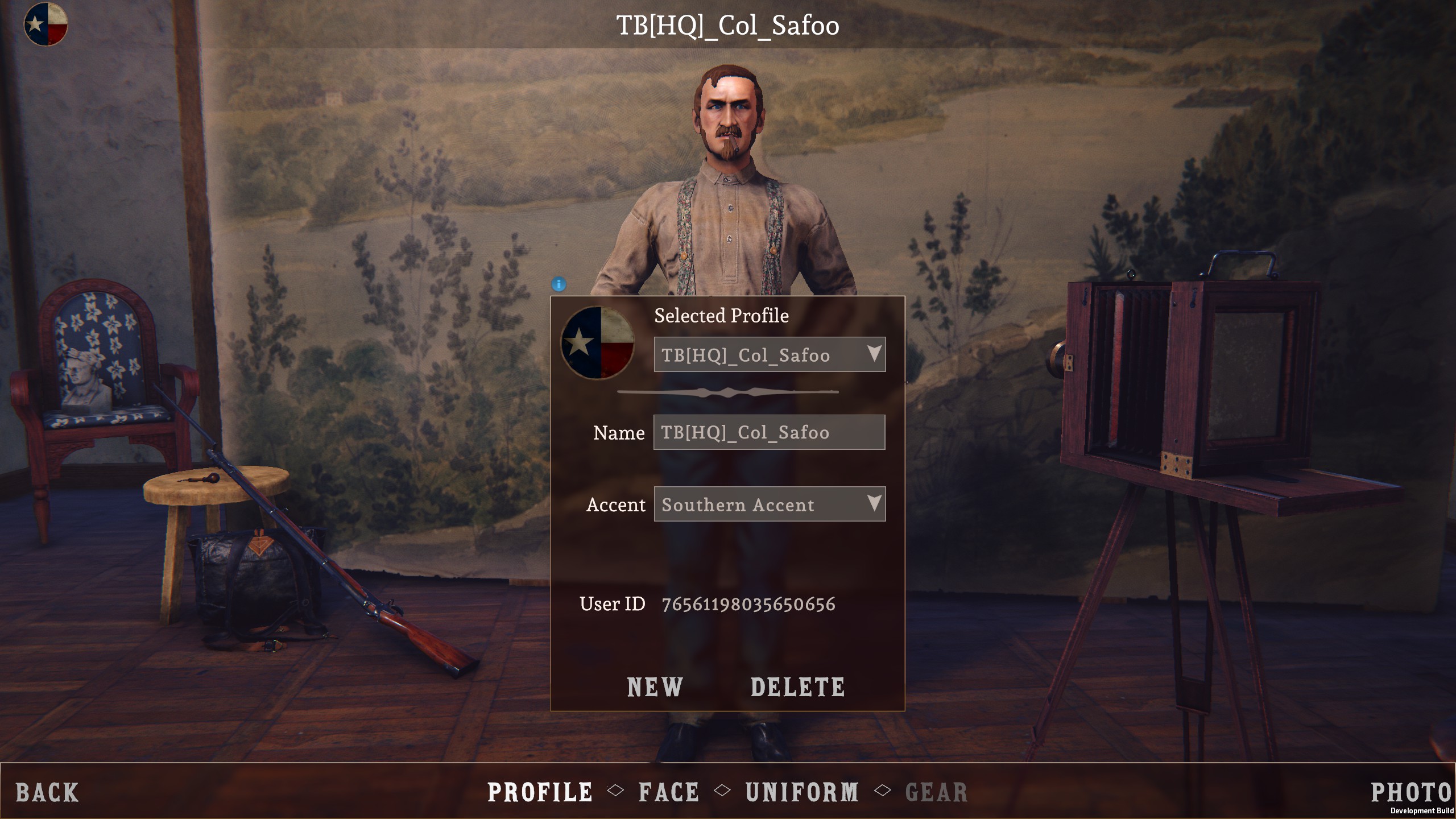 This is where you can name your profile and choose which accent they will have in game, a northern or southern accent. Both accents has unique lines that the character will yell when you press the yell button, C, in game. No matter what accent you choose, you will keep that accent with whatever side you play as.


Banners can be chosen by clicking on the banner icon which is the flag in a circle left of your selected profile. There are dozens of banners for both sides you can choose from to represent your character. 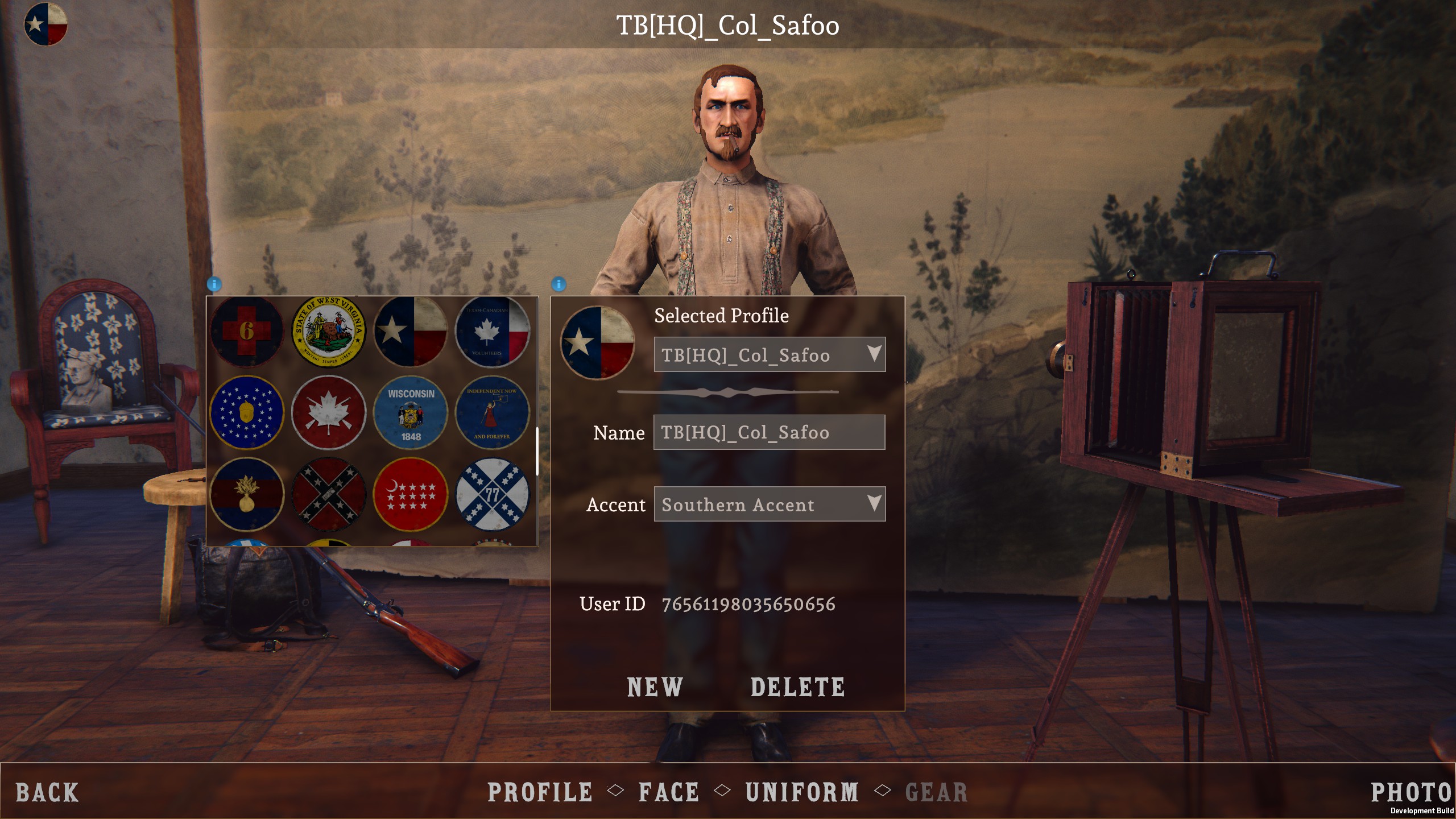 Once you are done creating your in game profile, click on face to customize how your character will look.


There are two races that you can choose from, White and Black. Battle Cry of Freedom is set in the later part of the American Civil War when black regiments were present on the front lines. Both races are customizable to make your soldier unique on the field of battle.


The White race will be used the majority of the time, for all regiments and ranks that had white soldiers. That includes officers in black regiments, since at that time, black regiments were led by white officers.


For the white race, you can choose your head, hair, and beard styles from famous generals from the civil war, along with what color you want your hair. Along with the facial features, you can add spectacles and pipes to your soldier’s face. 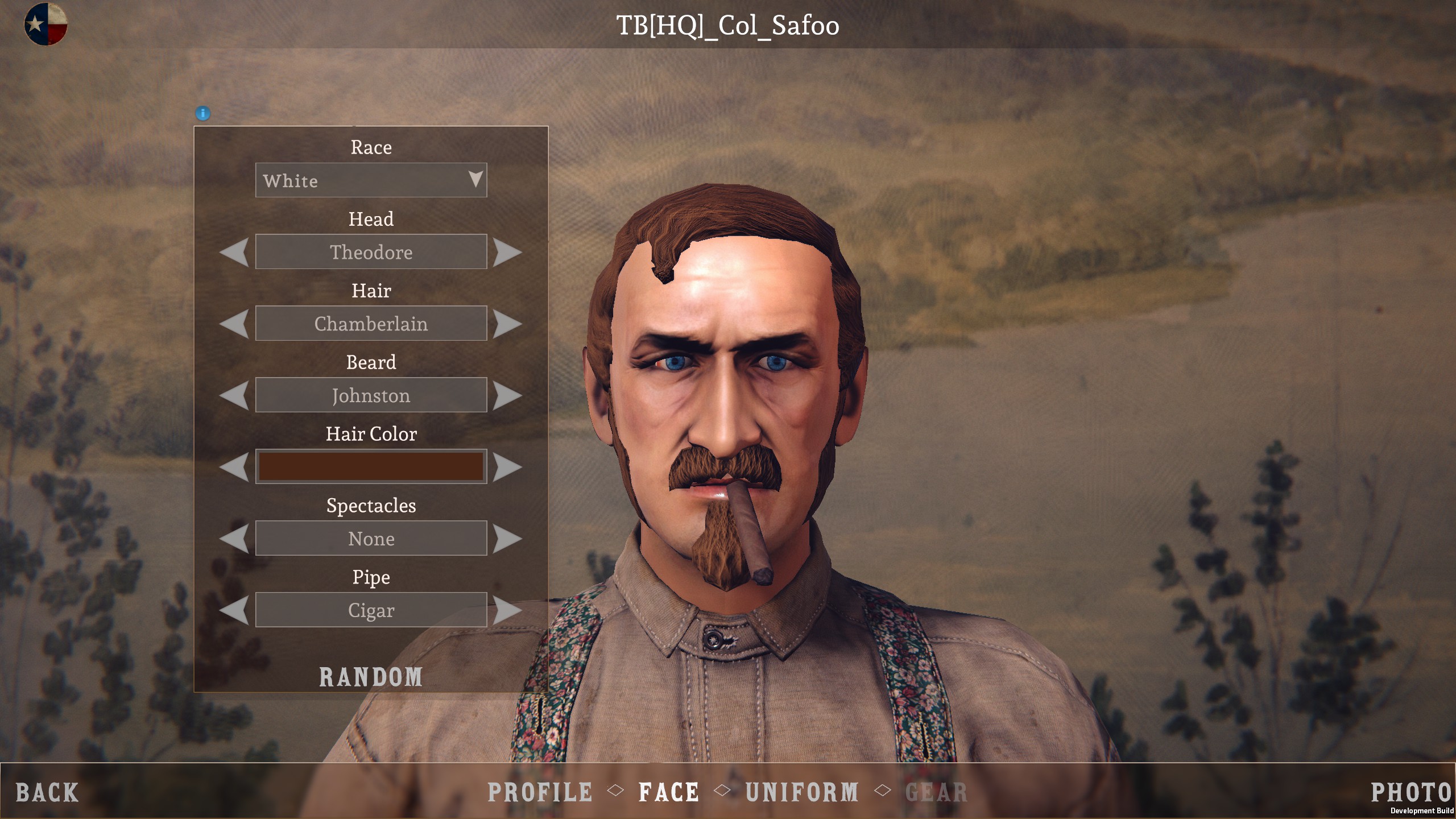 The Black race is linked to your character, so when you play as an enlisted or NCO soldier in a black regiment, such as the 54th Massachusetts Infantry, you will appear as black instead of white. Black soldiers have their own unique yell when pressing the yell button compared to the Northern or Southern Accents. 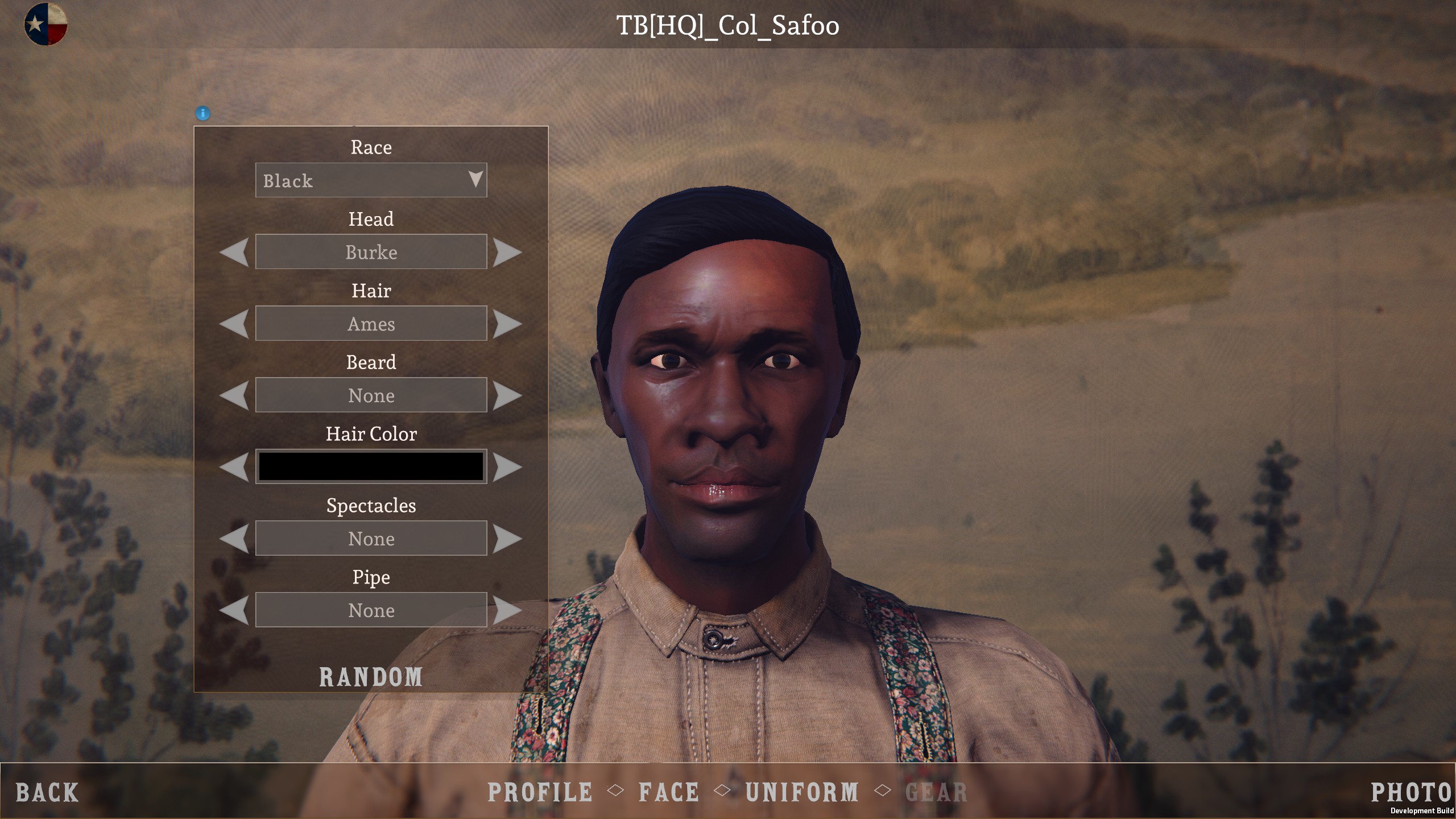 Once you are done customizing your soldier’s facial features, click on the uniform tab to see all the regiments featured on both sides of the game. 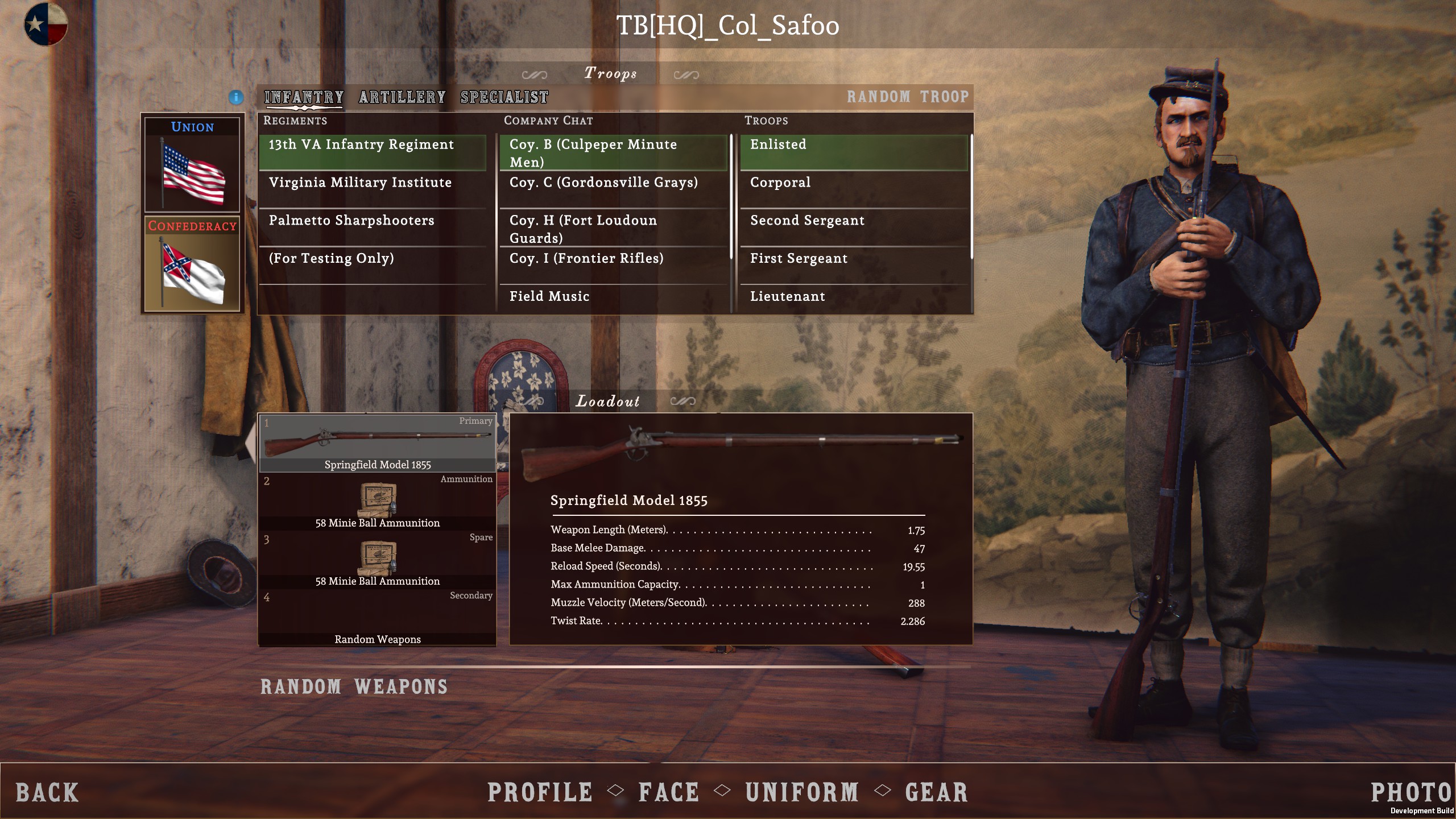 
Each regiment in the game has been thoroughly researched to best represent them in their chosen time period in which they are represented in game. Any regiment in the game is represented by their 1863 or later outfit so any regiment or uniform that predated that year will not be featured in the game. This time period also features a lot of confederate soldiers having access to blueish uniforms which on the field of battle can cause their allies or enemies to be confused by their uniform. (I have had my fair share of teamkills due to the uniform confusion in the heat of combat)

There are four branches you can play as in Battle Cry of Freedom, Infantry, Artillery, Cavalry, and Specialist. Every soldier of each branch can be customized with their specific uniforms to make each regiment look unique.


Infantry is the backbone of a civil war army and it will have the most regiments due to being the most important arm. Infantry are the foot soldiers who will do the most of the fighting and dying in combat.


Artillery uses the big guns that can kill at long range. They operate guns that range from the small 6 pounder to the huge 100 pounder. Though these cannons can be manned by a single member, guns can be used more efficiently if more are working together.


Cavalry are the soldiers on horseback who participate in quick strikes the enemy. The cavalry are susceptible to bullets due to their larger size of soldier and mount.


Specialist are the important members such as the engineers or medics who ensures the safety of their soldiers by either building earthworks or healing the wounded.

Regiments are the broadest level of organization in the game for each side, regiments have sub groups in their organization that are companies. Regiments have their own specific groups in the company section called “Field Music, Color Guard, and Regiment Staff.” These groups are not associated with any company and fill a specific role within the regiment. Regiments are led either by a colonel or their junior officer called a lieutenant colonel with their secondary officer being the Lt Col or Major if no full colonel is present.


No matter what rank of the company you choose for a regiment, the majority of uniform options will be the same. The only difference comes down to the company specific lettering. Each regiment has a specific theme that makes them unique in relation to other regiments on their side, whether the regiment having chasseur style uniforms, cadet jumpsuits, period camouflage, or the standardized attire. 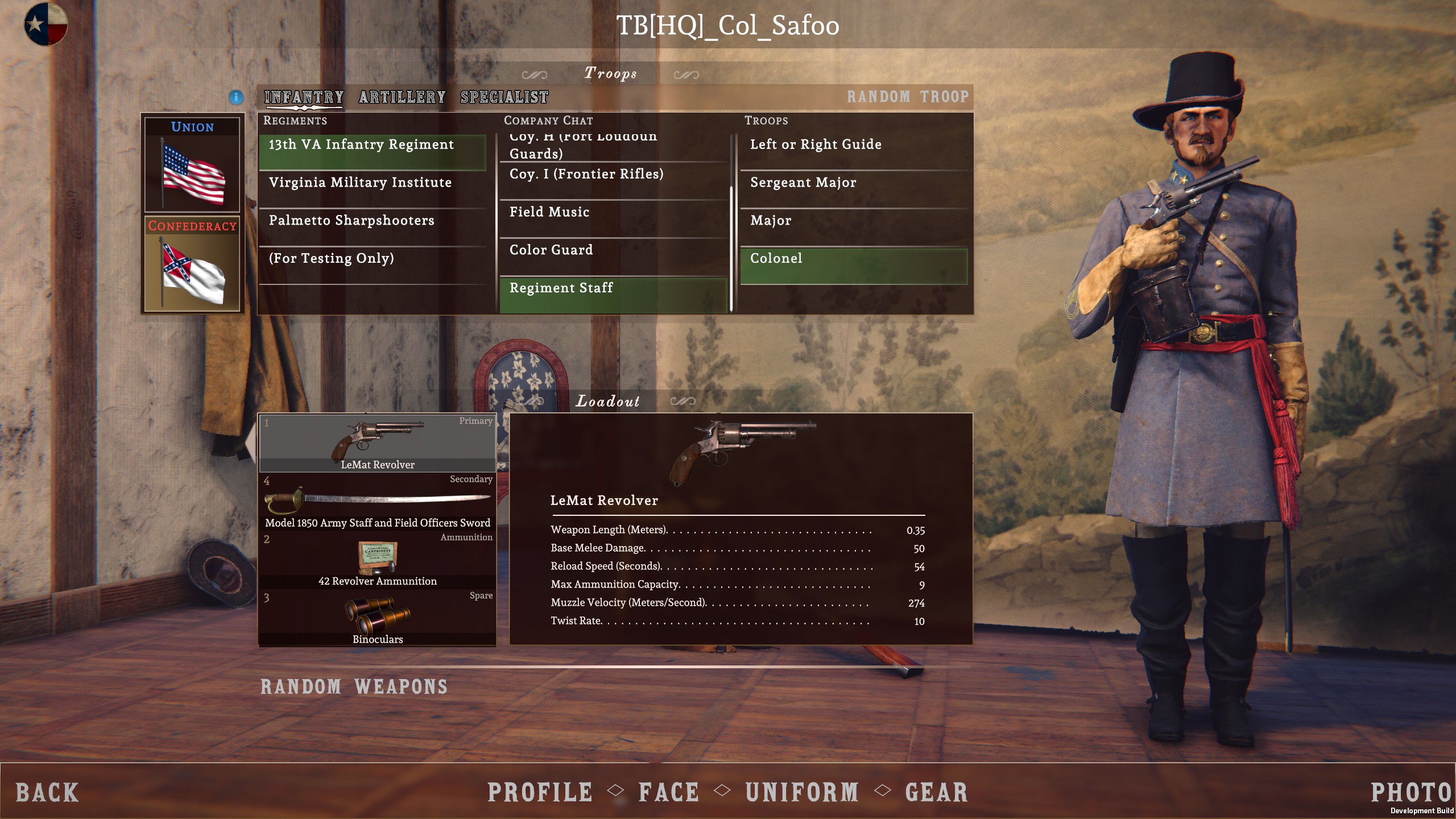 Companies are a sub level of organization for regiments. Each regiment in the game has 4 companies and are usually picked among the 10 to 12 companies the regiment historically had. Each company would have a captain as their leader with ranks going from lieutenant down to enlisted. Companies during the civil war were designated a letter that ranged from A to K with the exception of J. (A, B, C, D, E, F, G, H, I, K) Regiments with 12 companies will include the letters of L and M to their company roster. Besides their company designated letter, each company would usually have a nickname that goes along with their letter.

Each rank above Enlisted (Corporal to Bugler) gives a buff to nearby allies, so its always helpful for some people to go other ranks besides just the enlisted.


As mentioned above, all the groups after the 4 companies, Field Music, Color Guard, and Regimental Staff, are separate of the companies. These groups contain the regiment specific classes such as the musicians (fifers and drummers), Flag bearers (and color corporal), and regiment staff (2 highest officers, Sgt Maj and L&R Guides).

On this screen, you can choose what weapons your soldier of the rank selected will carry into battle. Each regiment has specific guns they wield, some might only have one gun, while other regiments have a lot more. Along with the weapon, you can choose ammunition type depending on what the gun can use. For officers, they have more options, which includes pistols, swords, binoculars, and lamps. Flag bearers can choose from their selection of flags. 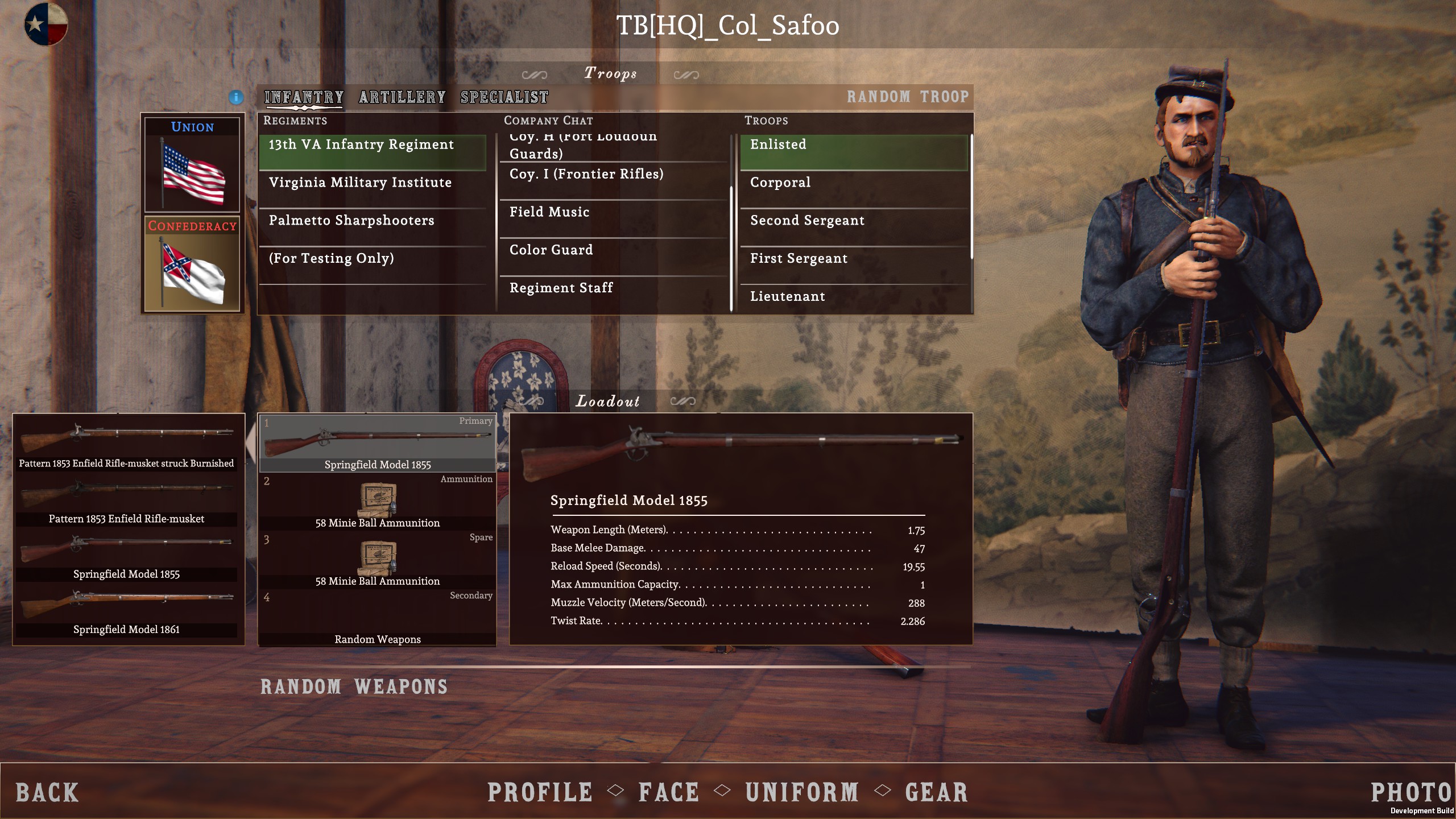 Artillery is organized the same way as Infantry in the customization menu.


However, instead companies, an artillery battery has Sections, which is essentially an infantry company. 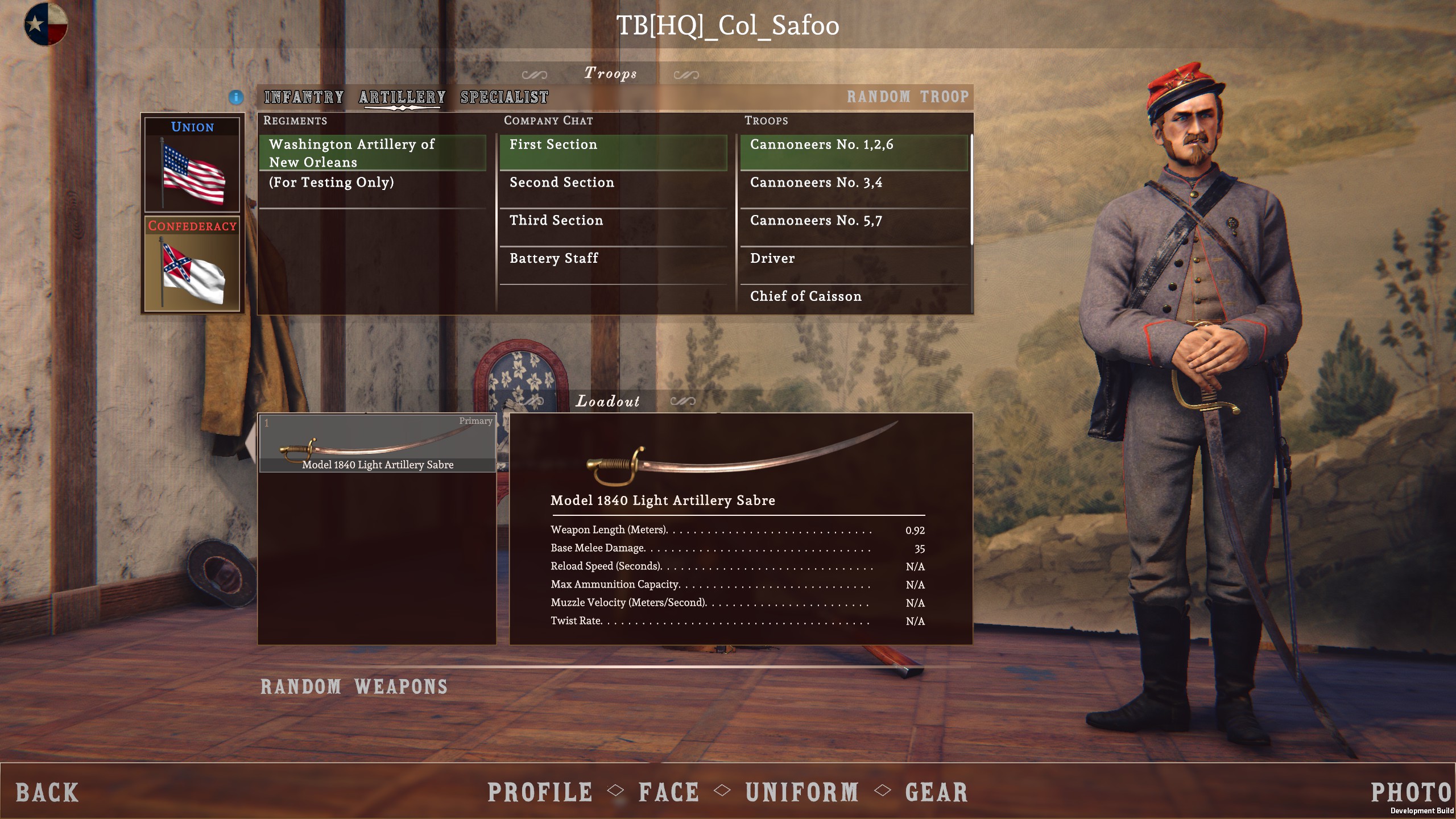 Sections in an Artillery battery are numbered first, second, and third. With the forth group being the battery staff. Each rank in a section historically had their own roles that they work on, however, in battle cry of freedom, the majority of the ranks are basically the same due to what they carry into battle.

Cavalry is currently not in Battle Cry of Freedom, when it is added, I will update this section.

The Specialist are anybody not associated with any of the other branches above, this mainly pertains to Engineers, Ambulance Corp, and Militia.


Engineers are those who can constructed earthworks to protect their allies. 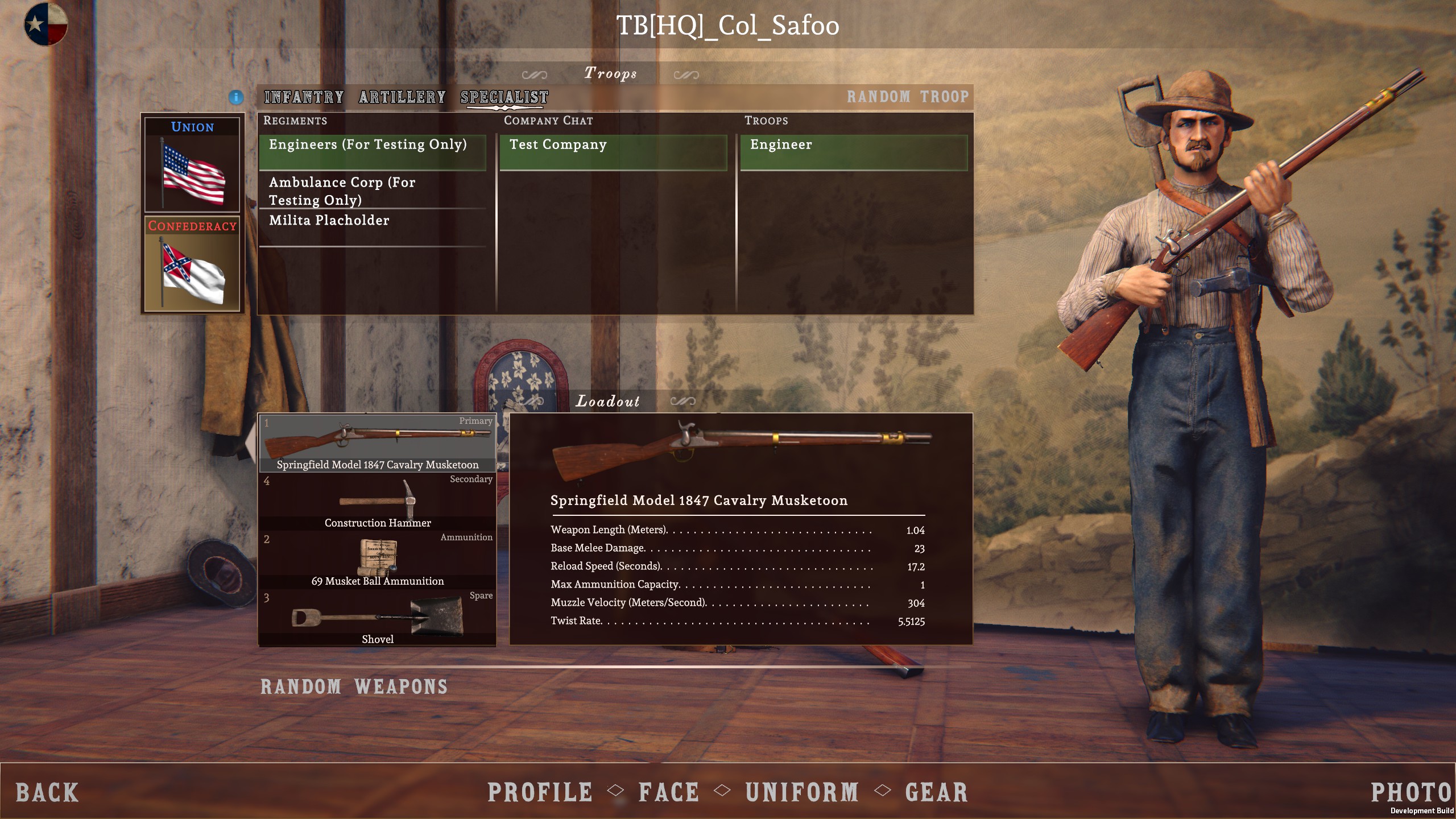 Ambulance Corp are medics who help allies that are hurt. 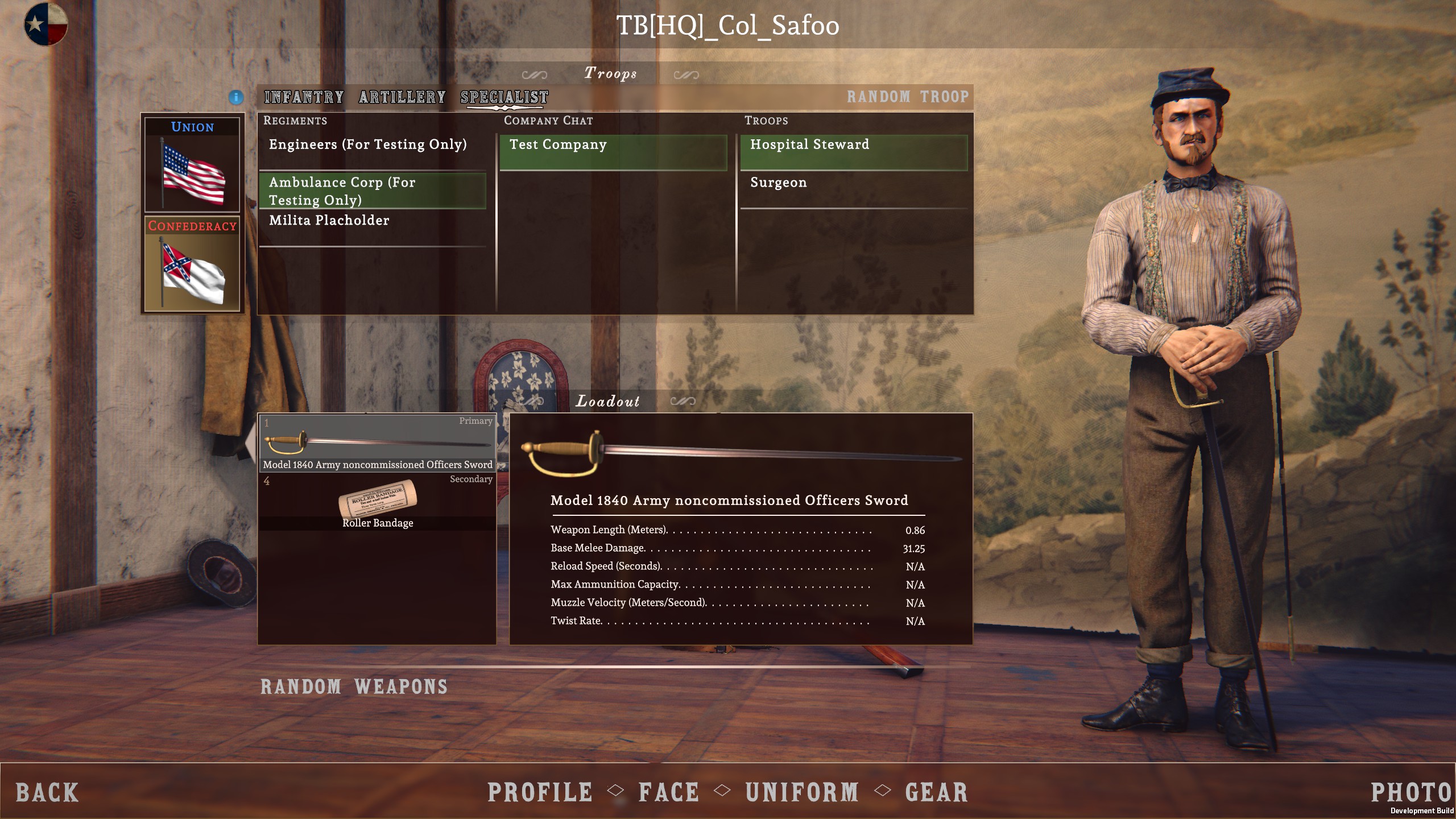 Militia are non regular soldiers who are assisted the regulars in combat with their non standardized gear. 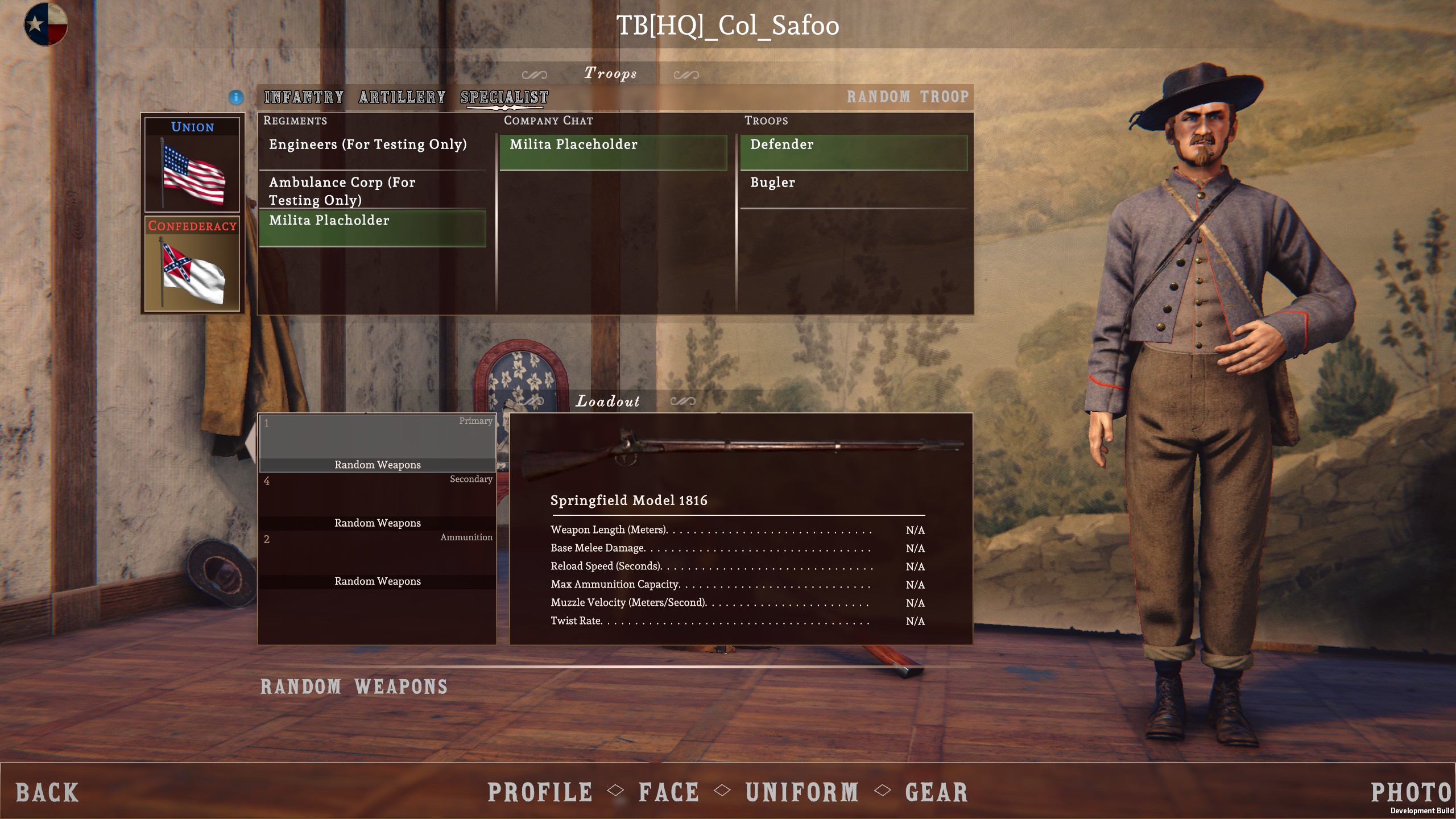 Once you find a rank that you want to customize, click on the Gear tab to bring up the uniform customization screen. 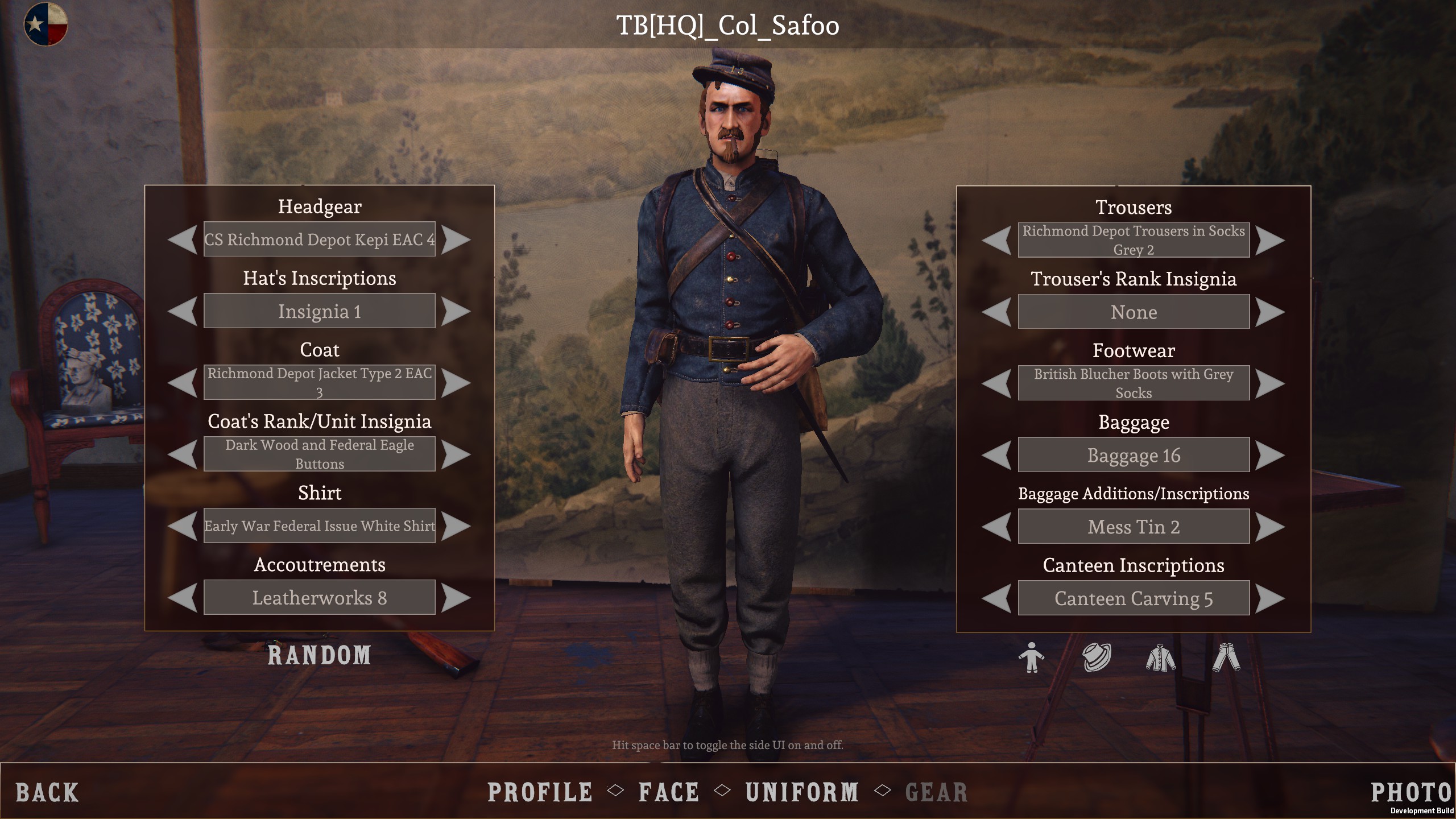 Everything shown above can be customized to your liking, you can click on the left and right arrows to change what the regiment has to offer. Some regiments have more options that others, especially if they don’t have very specific uniforms like the 72nd Pennsylvania, who for an example, have a very few options related to their uniform choices.


Every rank of every company of every rank can be customized to an extent, totally based on what the regiment has to offer.


You can rotate your soldier by clicking and dragging to the left or right to turn him around to see different angles. There are also attire specific views at the bottom right for the entire body, hats, jackets, and trousers.


There is also a Random button on the bottom left of the screen if you want to see what the game will generate for you. (I use this a lot to see what the regiment has to offer in terms of its uniforms) 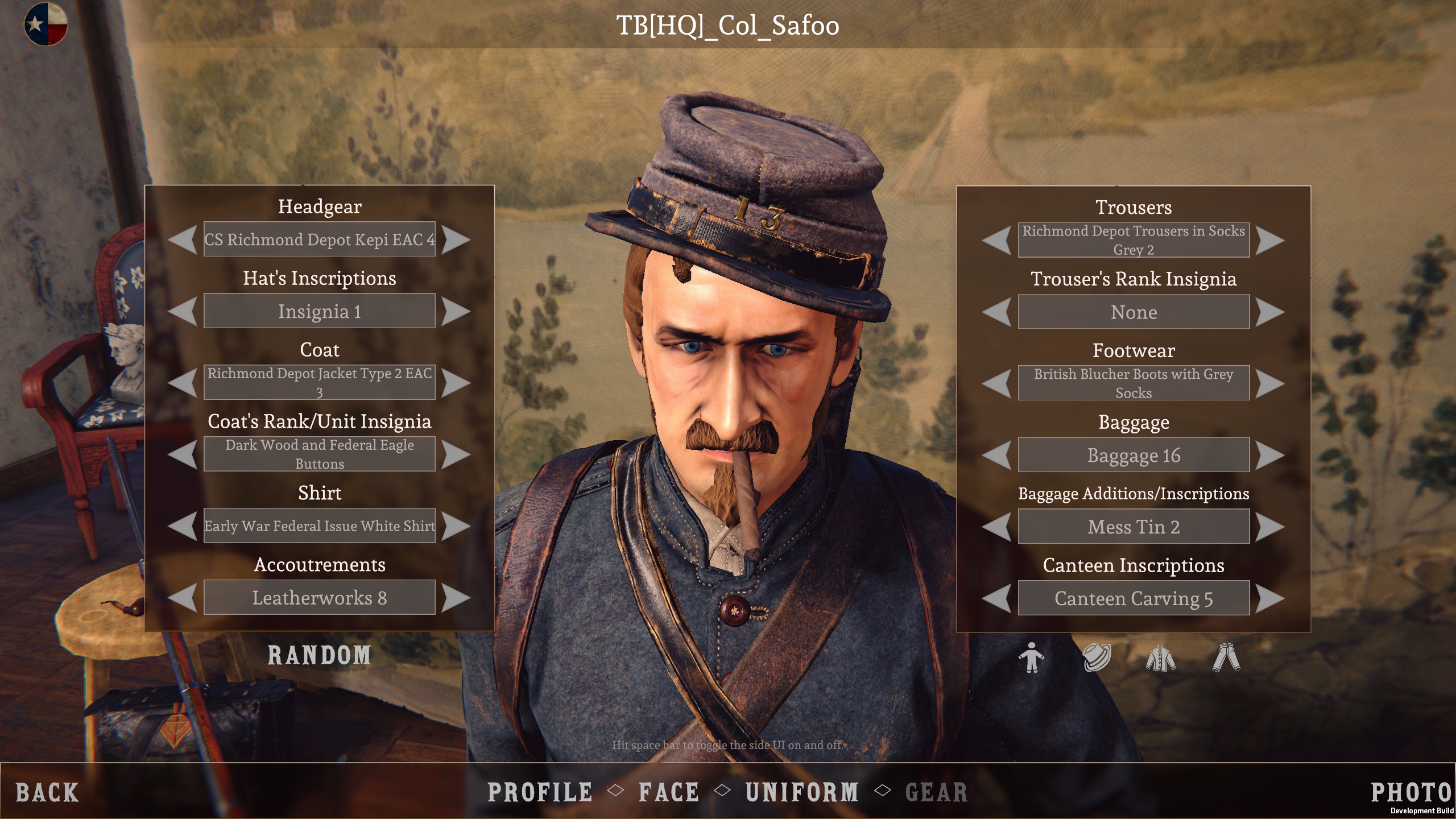 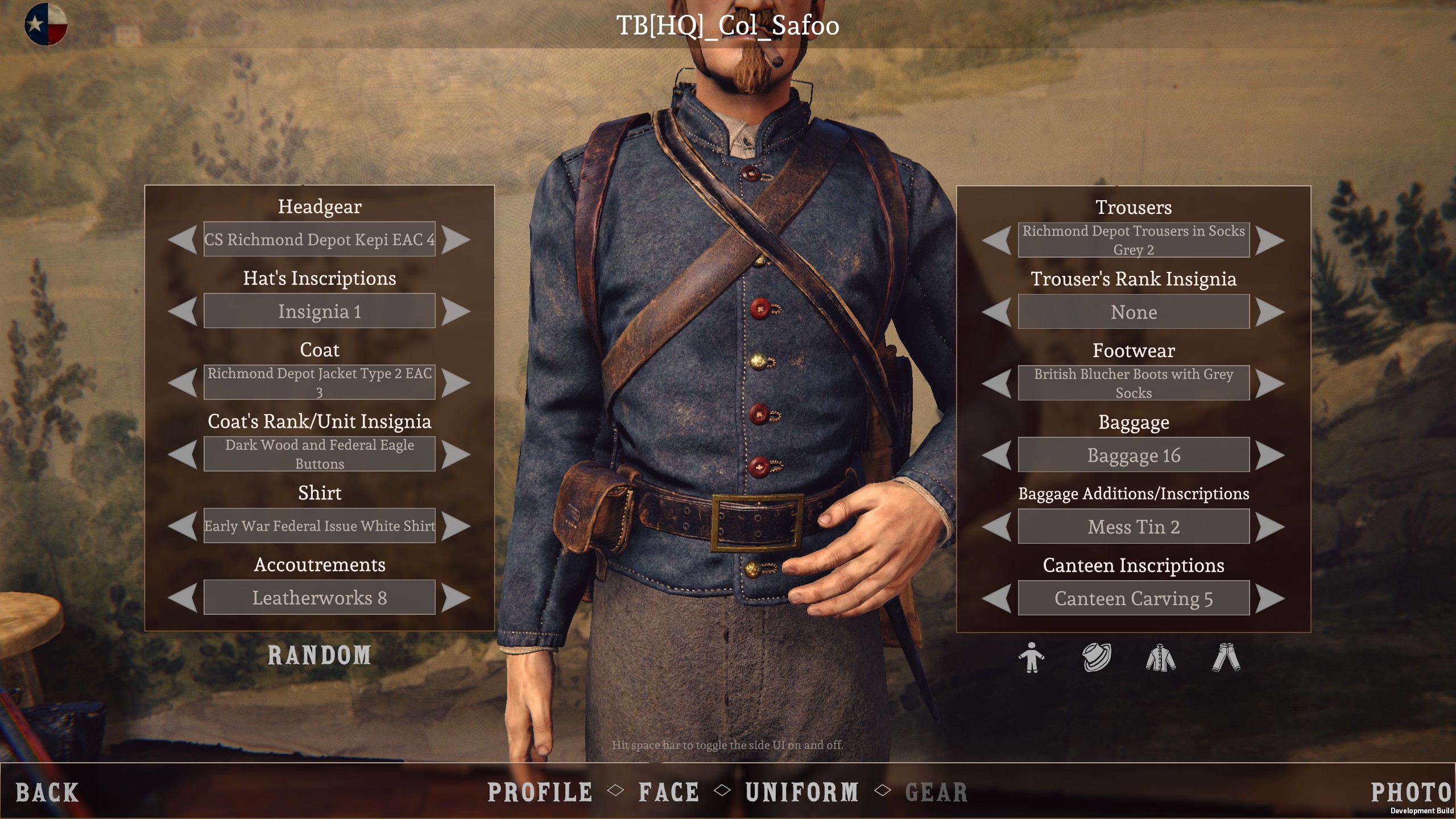 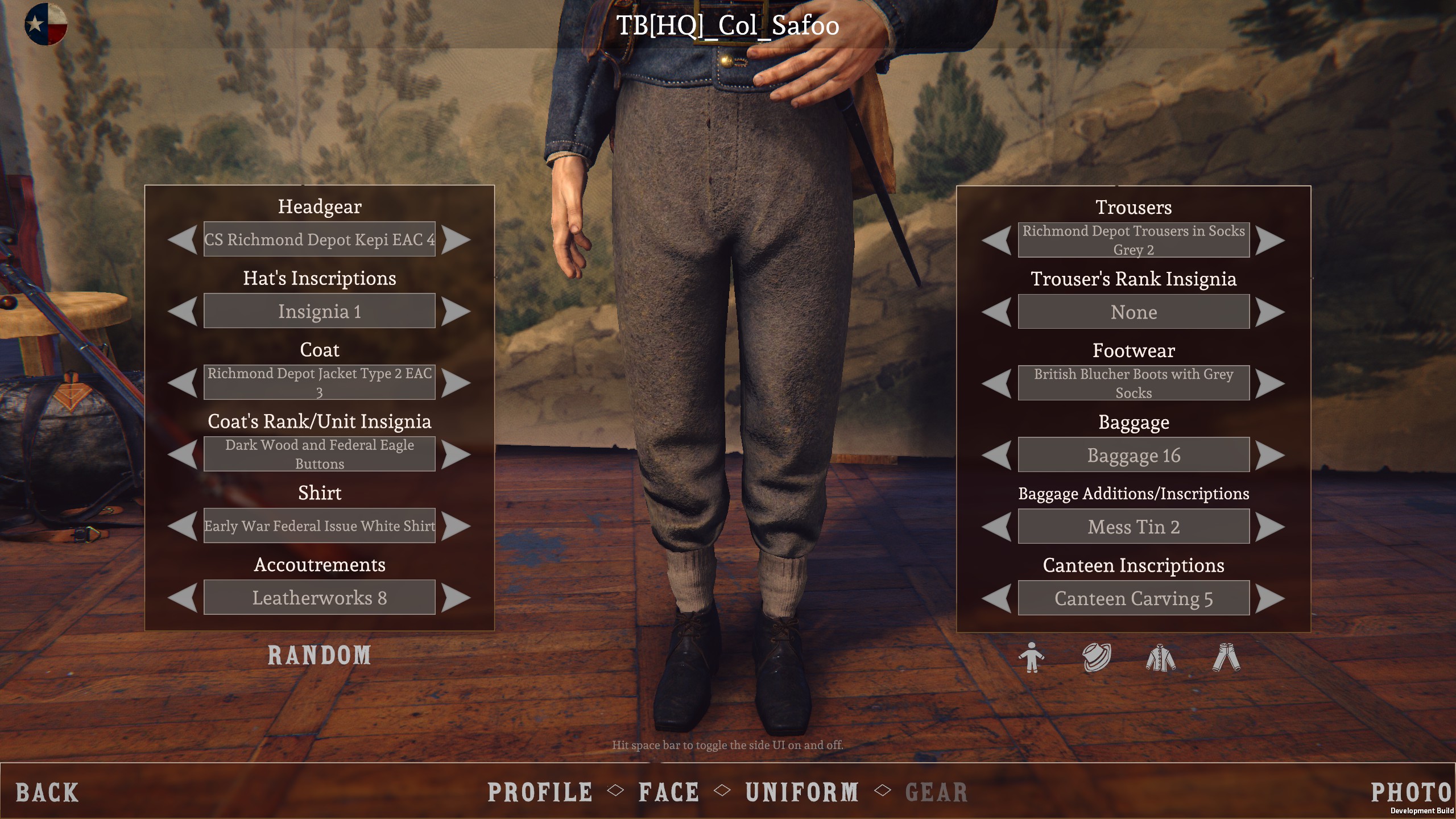 What to do after customizing

Once you are done with customizing your character, you can select your customized rank on a server and show it to your friends and reg.


There is also a photo button at the bottom right of the screen that allows you to take a black and white picture of your soldier if you want to have another way of showing off your soldier.

Here are some photographs below of some of my uniforms I customized. 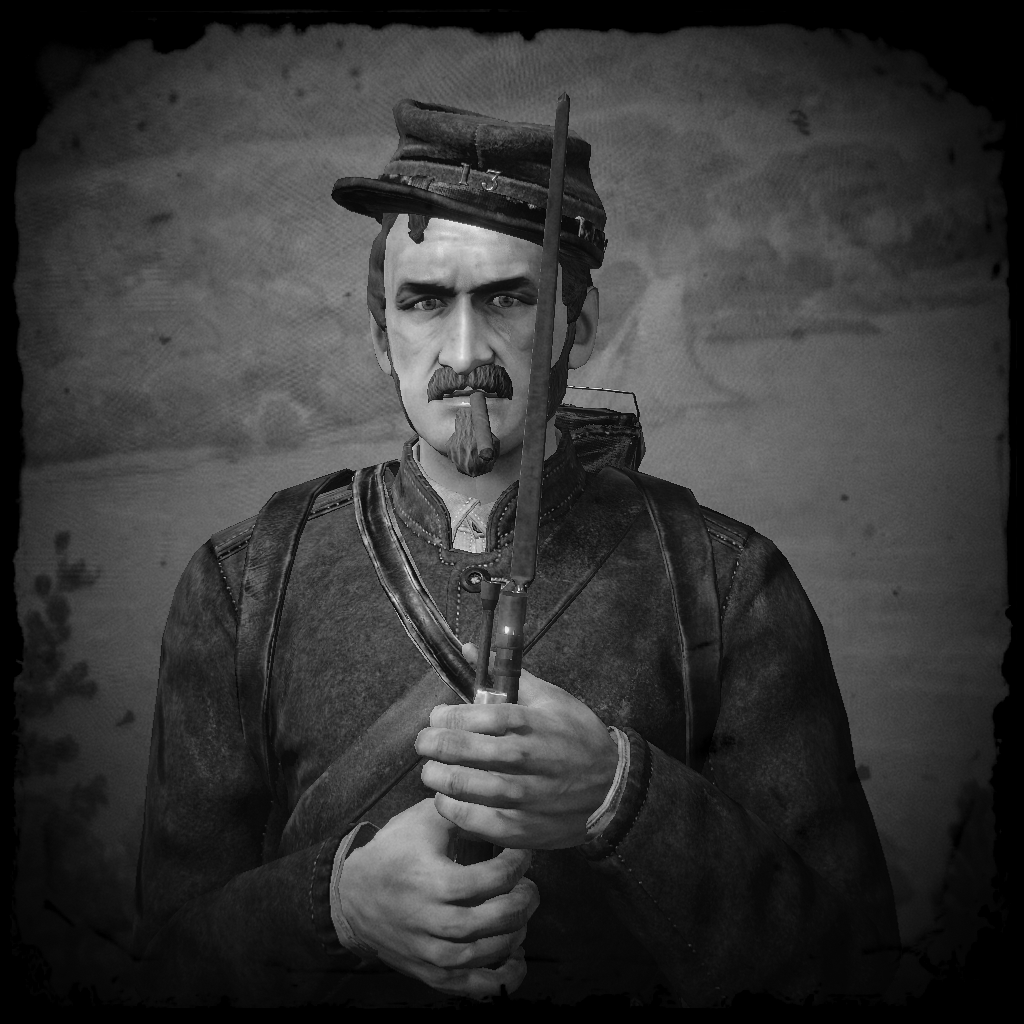 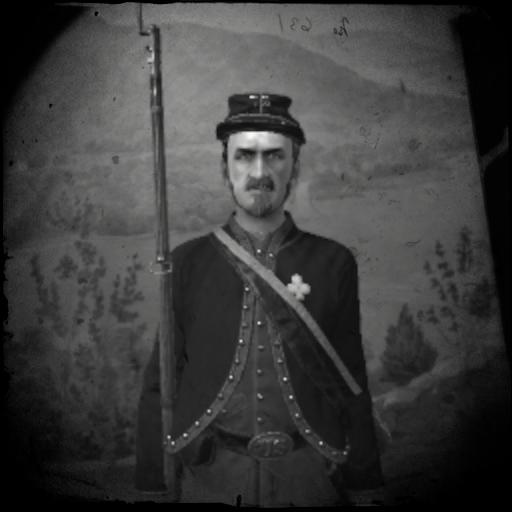 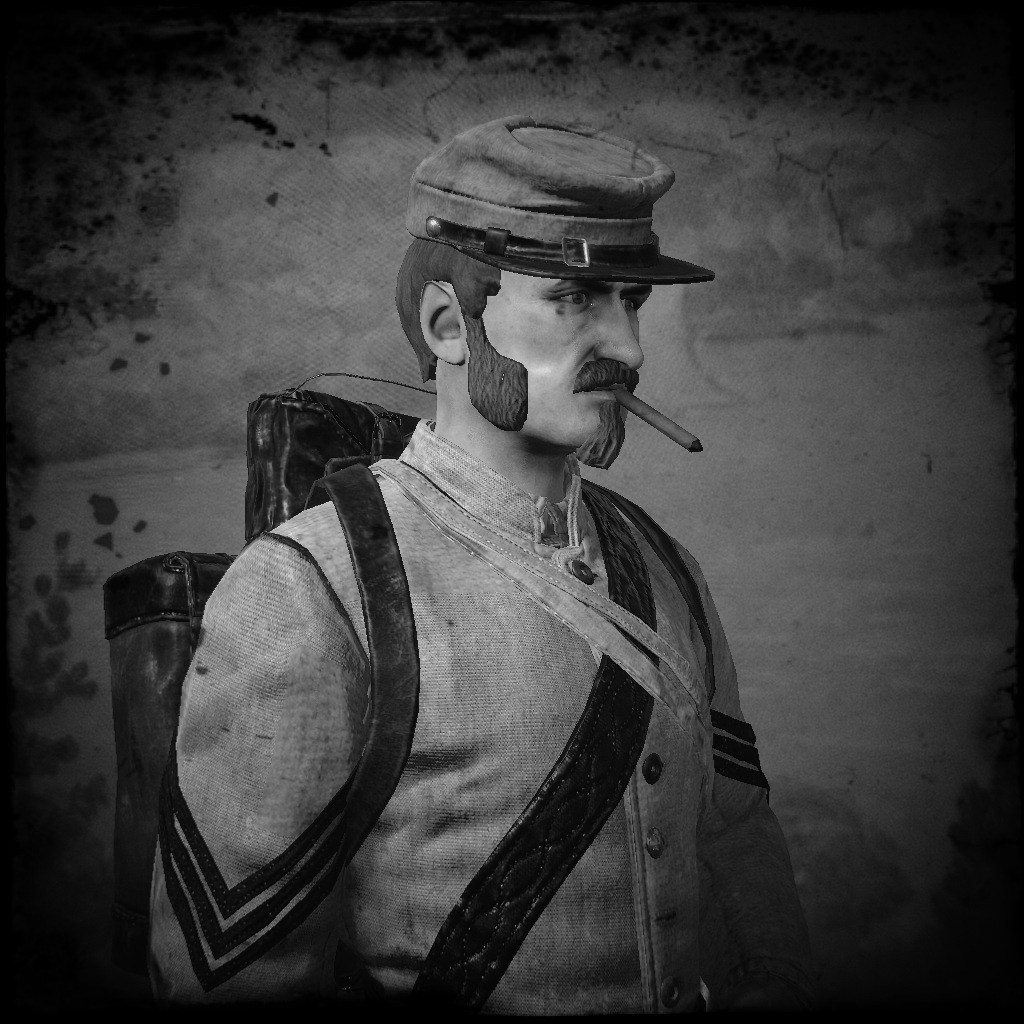 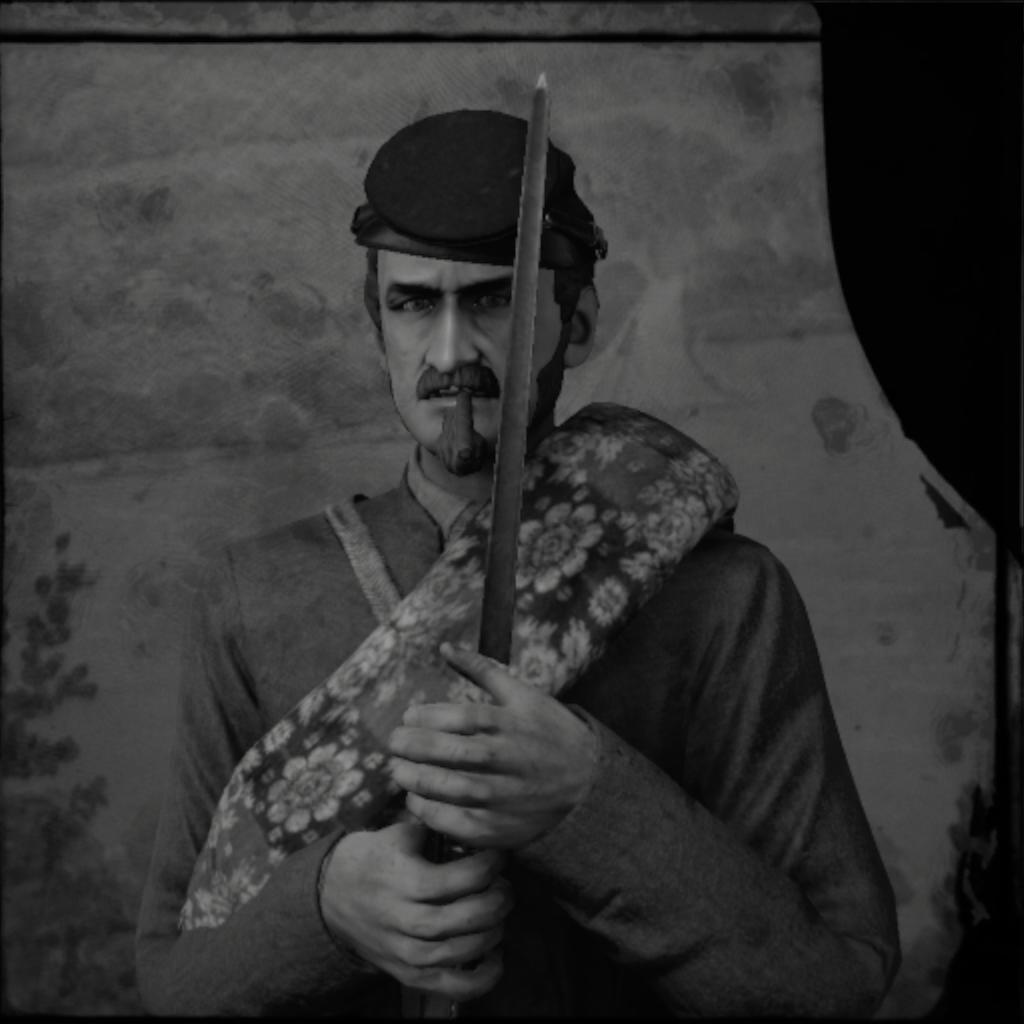 I hope you enjoy the Guide we share about Battle Cry of Freedom – How to Customize Character & Uniform Guide; if you think we forget to add or we should add more information, please let us know via commenting below! See you soon!