Played the tutorial and still confused? Here’s a quick rundown!

The object of the game is to obtain the lowest score. The score is calculated by taking the numerical difference between your traits and the bachelor’s desired traits and adding/subtracting any modifiers.

Your goal is to get your traits as close to your chosen bachelor’s desired traits as possible by playing cards. Note that if a bachelor desires a certain number of a trait, e.g., three wit, he wants exactly three wit and no more; increasing your wit beyond this point decreases your score (a gentleman can’t be outshone by his wife now, can he?)

Certain cards can be played to a bachelor to make him less desirable. While these appear as negative modifiers, they are actually added to the final score, i.e. if a bachelor has a negative modifier of -2, two points will be added to the score of any couple of which he is a part. Other cards can be played directly to a rival to increase her final score.

The player in last place will receive an extra event before the final chapter (“A Last Ditch Opportunity”). She will have the opportunity to either answer a trivia question about her chosen bachelor based on the chapter intro text (“Steer the Conversation…”) or refuse to do so (“Play hard to get.”). Answering the trivia question correctly earns you a +2 modifier with that bachelor (2 points subtracted from your final score with that bachelor). There is no penalty for answering incorrectly.

Playing hard to get gives you a 50/50(?) chance of obtaining a +2 modifier; since the trivia question has four multiple choice options, this is generally better than guessing. 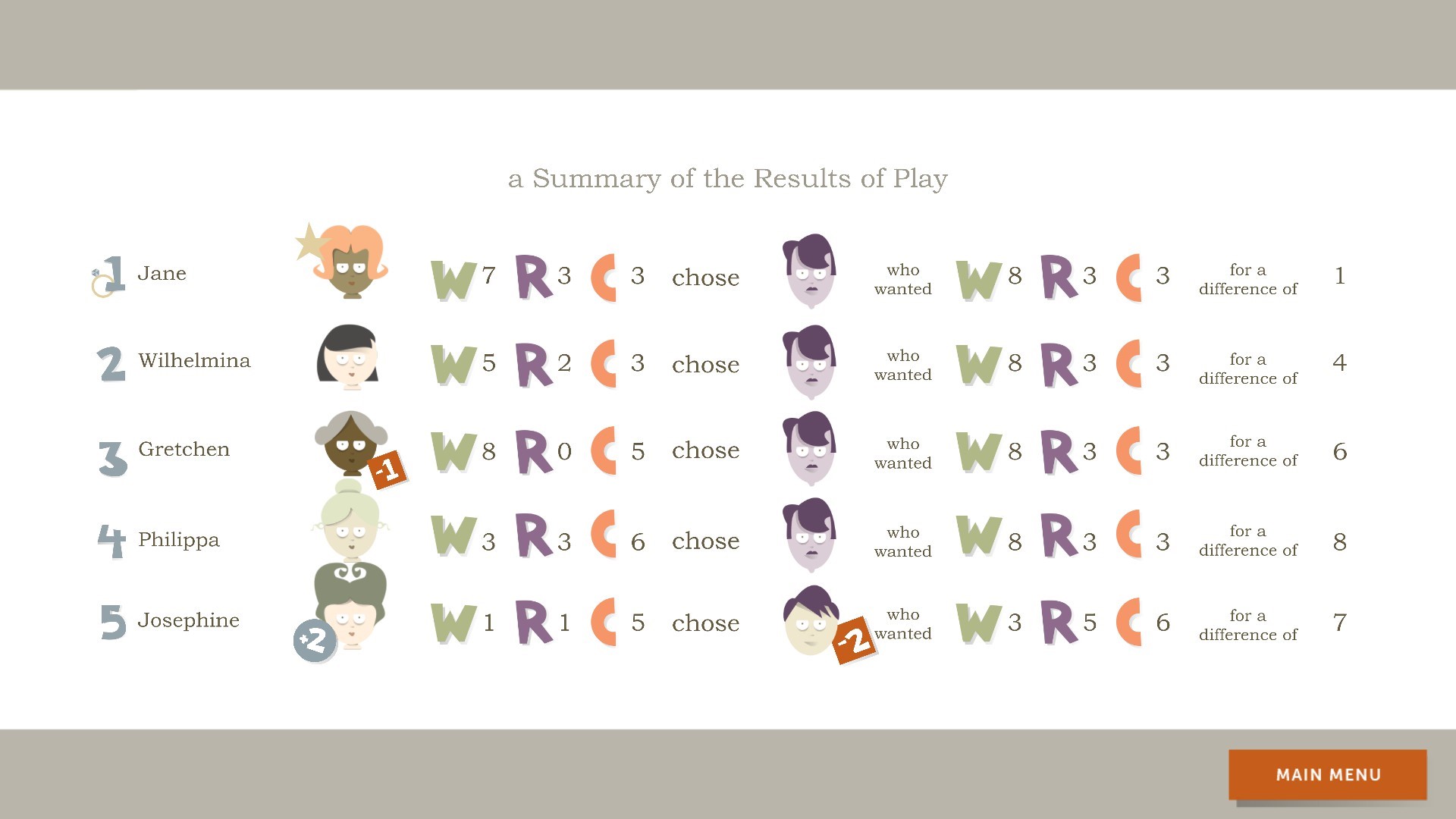 Each game consists of four chapters, during which the rivals can play cards. Events occur in a set order.

The player chooses an initial bachelor upon starting the game:

Chapter 1 – each rival chooses a card to play

And just how did that go over? – The player’s chosen bachelor reacts to her last action (this can be a good way to suss out unknown preferences!)

Chapter 2 – each rival chooses a card to play

A Stolen Moment With Her Bachelor – The player’s chosen bachelor reveals where she stands in his preference order (his top choice receives four hearts, his next choice receives three, etc.)

Chapter 3 – each rival chooses a card to play

The Couple to Beat – The couple with the lowest score is shown.

The Plot Twist – A random event occurs. This may eliminate one bachelor, prevent a certain bachelor-rival pairing, or make a certain trait more or less desirable to all bachelors.

A Last Ditch Opportunity – The player in last place is presented with an opportunity to increase her standing with her chosen bachelor by answering a trivia question based the text preceding previous chapters.

Chapter 4 – each rival chooses a card to play; one player may attempt a spinster victory.

Epilogue – each bachelor proposes to the rival with whom he has the lowest score. The victorious couple celebrates their wedding and the fate of the rest of the cast is revealed.

There are two types of victories in the game: marriage victories and spinster victories.

A marriage victory is obtained by receiving and accepting a proposal. After the final chapter, each bachelor will propose to the rival whose traits most closely match his desired traits, i.e. the rival with whom he will have the lowest score. A rival will accept a proposal only from the bachelor she selected before the final chapter.

If two rivals obtain and accept proposals, the couple with the lower score will be victorious; the other will meet a tragic (randomized) fate. If two couples have the same score, a double wedding is announced and both players win.

A rival whose traits don’t match up well with any of the bachelors’ expectations can still achieve victory by pursuing a life of spinster-hood. This option always appears as a card during the last event and can only be chosen by one rival. 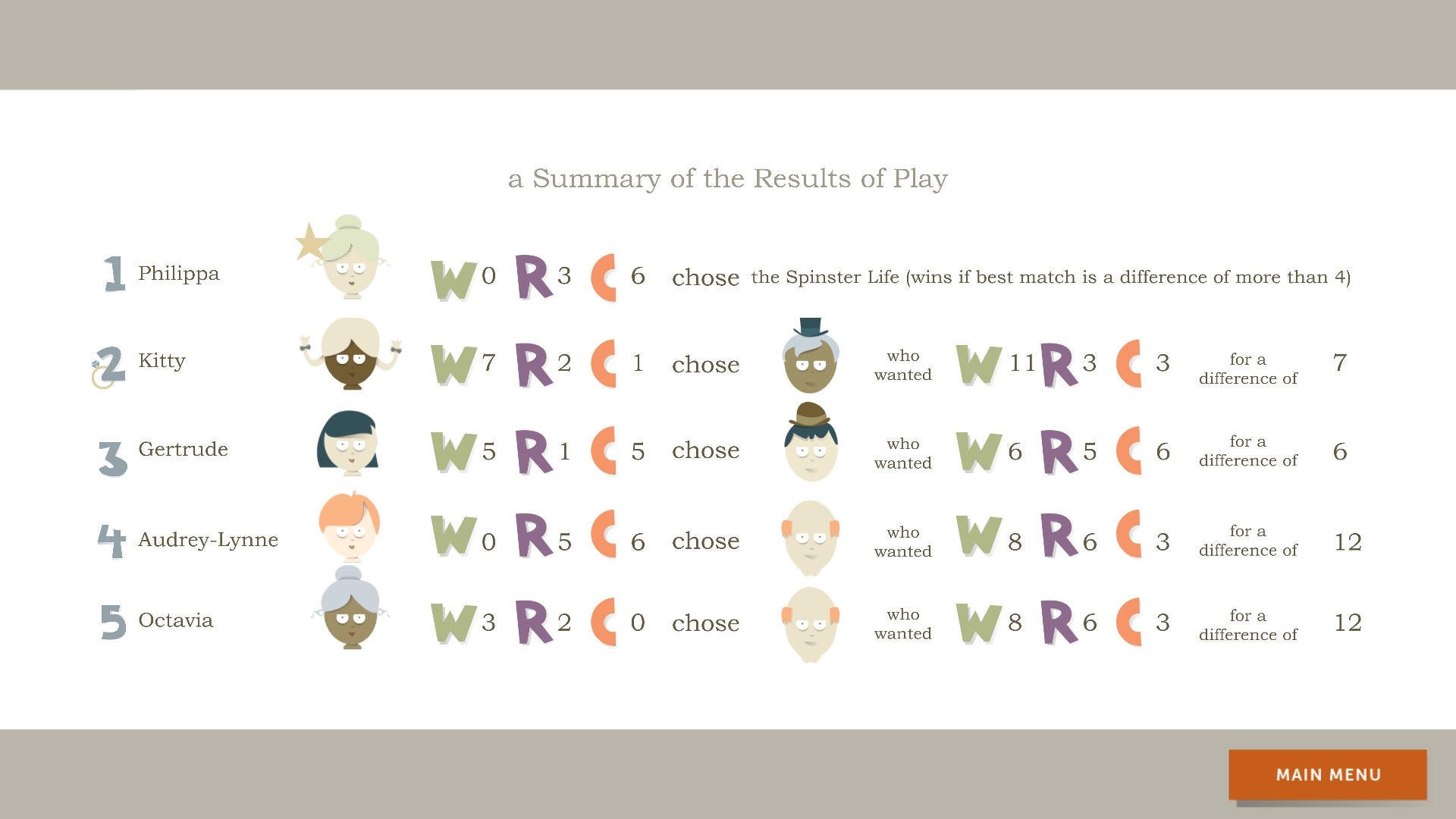 In this example Kitty has obtained a proposal but her score is greater than four; therefore Philippa wins with a spinster victory.

I hope you enjoy the Guide we share about Austen Translation – How Scoring Works; if you think we forget to add or we should add more information, please let us know via commenting below! See you soon!