This guide explains all game modes and related settings…

With the battle settings you can choose the rules and winning conditions for your battles. Some required or optional objects can also be placed from there.

To open the settings panel, use the red marked button.
In the following sections you can find more information about the settings and each game mode…

These settings are available for every game mode… 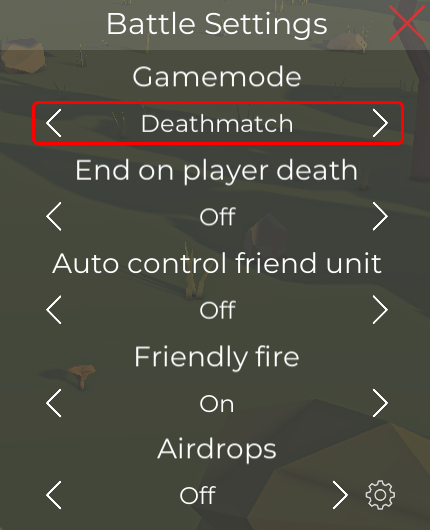 Gamemode By using the red marked selection, you can change the game mode and edit the relevant settings for them.

End on player death If this is enabled, the battle will count as lost when the player dies. *

Auto control friend unit You will automatically control an allied unit 3 seconds after dying, if this option is enabled. *

Friendly fire If this option is enabled, allied units cant damage each other.

Airdops An airplane will fly over the map and drop a random supply package depending on the time interval of this option. With the small gear button, you can adjust the content of the airdrop.

* These options does not affect Conquest and KOTH because the player will respawn automatically.

Deathmatch is the default game mode of Ancient Warfare 3. There are no special settings for it. To win you have to kill all enemy units. If no units are left on both sides, the game will end as a draw. In other words, the surviving faction (blue, red, zombies) wins.

The goal in conquest is to capture and hold certain areas. Those areas are marked by flags.
When Conquest is selected there are more options available in the battle settings panel…

By default you will see large blue/red spawn areas on each side of the map. If you want to adjust the spawn areas, you can use the Blue/Red Base button to place as many base spawnpoints for each team as you like.

The Place Flag button can be used to place up to 10 target areas which can be captured by the red and blue team.
By enabling Capture all flags to win, the game will end when one team captured all flags. 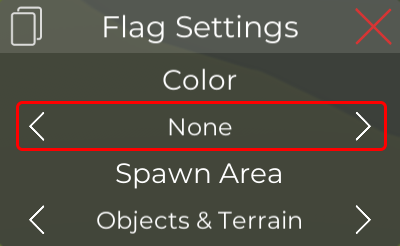 If you select one of the placed flags, you can adjust the starting owner by changing the Color setting. None means that the flag isnt captured by any team at the beginning.

Functionality and placement list
Unlike in the other game modes, units will respawn at the base flags or at captured flags which are uncontested. Placed units will work but not respawn. To choose the list of respawning units for both teams, you can use the button Edit Spawnlist to open another settings panel. 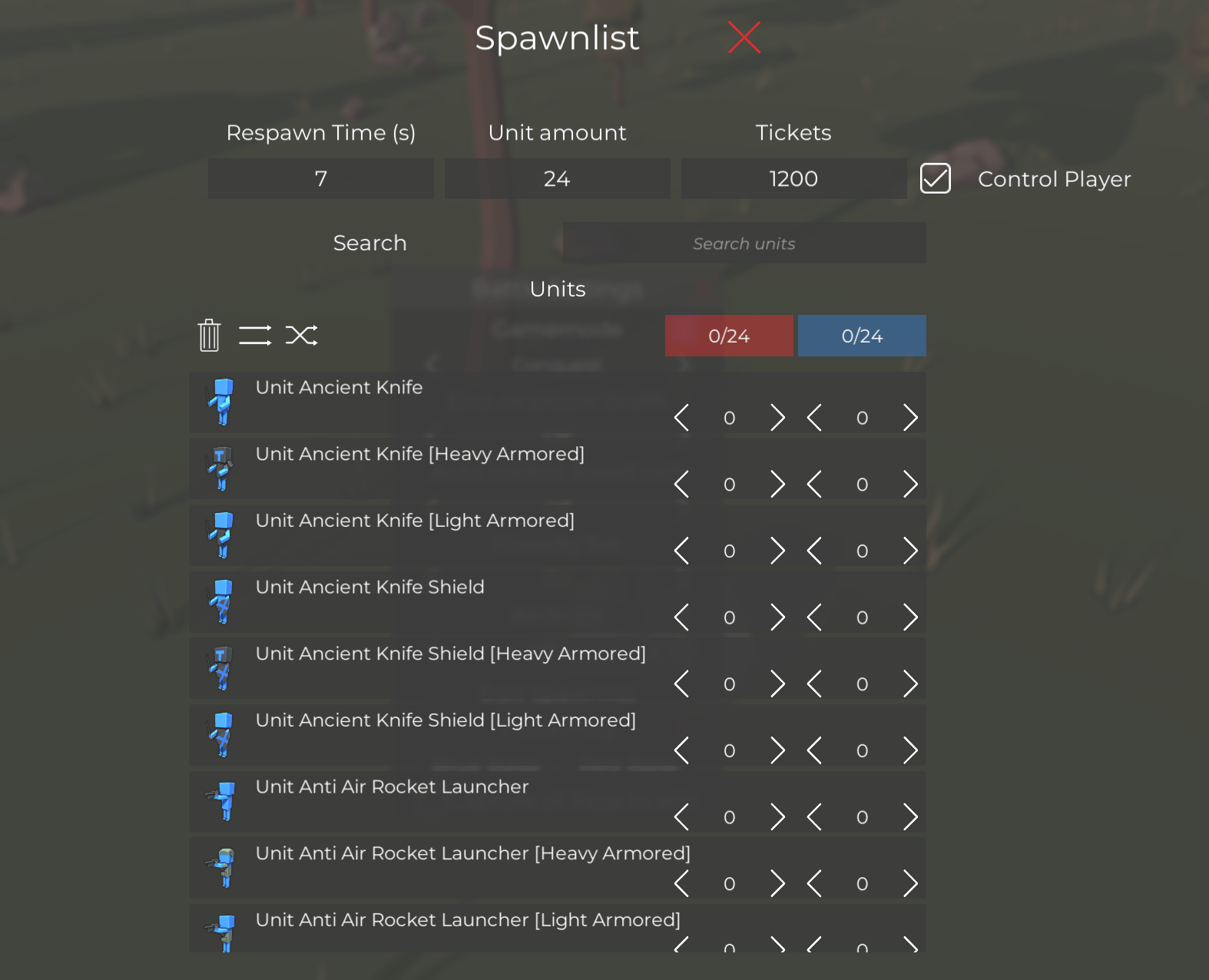 There, you can adjust the respawn time, the max. unit amount for each team, whether you want to control a player or not, and the amount of tickets.
Tickets will be used to determine a winner. Each team starts with the selected amount of tickets. Everytime a unit respawns the tickets are reduced by one. For every second a flag is hold by a team, the other team looses one tick. After a team has reached zero ticks, it lost the battle.

The actual list of respawning units can also be selected in this panel.

King of the Hill

King of the Hill (KOTH) is very similar to Conquest, which is described above. The difference is that instead of multiple flags, teams fight to control one flag for a set amount of time. Once the flag was captured for the required time, the team wins. (There are no tickets)

In Zombie Survival the player fights against spawning zombies.

By default this game mode does not have a win condition. You have to fight until the player dies. By enabling Time limit you will win after you survived the set amount of time. If you enable Hunger & Thirst is enabled, the player will need to open airdrops to restore energy. Otherwise the player will start to loose health over time.
Zombies will spawn in a circle around the map center. However, you can also set the spawn points instead by placing them with the Place zombie spawn button.

In Elimination the goal is to eliminate a set target. To select the target you can press the Set Elimination button. The game will switch to a selection mode and you can click on a placed unit to select them as the target. (To cancel without selecting one, press escape)
Depending on whether you set an enemy or allied unit as a target, you have to defend or eliminate it and win or lose when the target dies.

In the hostage mode the player has to free and escort hostages to an evacuation point. With the Place hostage button you can place as many hostages as you want to. At least one is required. The Place evac point button allows you to place the target point where hostages will extract. A player is required for this mode to be played.

Functionality
Hostages are handcuffed and can’t move. Enemy units will not attack hostages while they are handcuffed. The player has to get to the hostages, look at them and interact to free them. (A HUD notification will be visible when looking at a hostage, the default interact key is F)
After releasing the hostage, it will follow the player. The player can look at the hostage and interact again to toggle between wait and follow mode. This can be used to let hostages wait while the player clears areas from enemies. Once the hostage reaches the extraction zone it counts as rescued. The game ends when all hostages are either killed or rescued. If at least one hostage got rescued when the game ends, the player wins.

This game mode can be used to test things or create battles without any end conditions.
You can overwrite this behaviour by enabling End on player death

This is all about Ancient Warfare 3 – Battle Settings; I hope you enjoy reading the Guide! If you feel like we should add more information or we forget/mistake, please let us know via commenting below, and thanks! See you soon!