You bought the game. It was fun for 5 minutes. Now it has gotten pretty hard. Now what?


Here’s 7 tips to get more bang for your buck out of this game.

Tips from a Salty savage berserker.


Try to run along the perimeter in one direction only, like its a big square track. instead of a full map Try to kill only whats in front of you as much as possible (but its always good to deviate to kill moltov cocktail throwers/gold chain wearing thieves). Running backwards to get power ups is a fools errand and leads to death often.Don’t do it unless you want o risk getting mobbed. If you pew pew the zombies in front of your run path, it’s easier to collect their loot drops without getting bum rushed. I keep running the full perimeter pattern trying to reduce zombies until I get to the single digits at the end of wave 3 of 3 (the wave and remaining zombies # in the wave can be tracked in the top right). Also, try to not hug the outside border wall though; treat it like NASCAR instead [get to the inside lane]. What I mean is don’t hug the border of the game. Getting too close to the border wall will open you up to higher chances of getting caught in missed moltov cocktail blasts that hit the wall next to you. 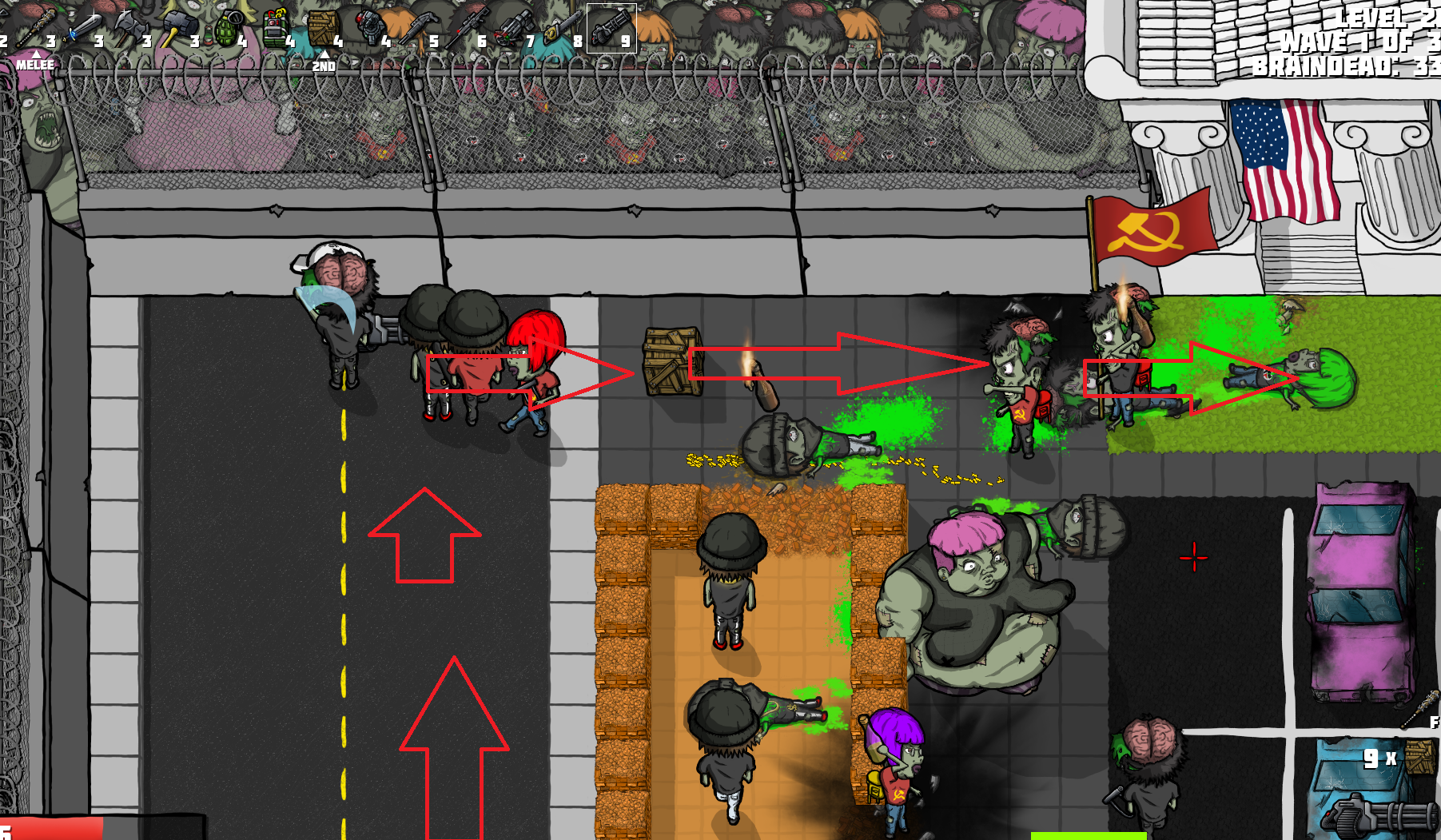 
You can use boxes in the early levels in the middle of the thin walk ways. If placed correctly it will allow you to get a little bit of breathing room when you run into that area from the first kind of boss. This tip stopped working for me when the “they/them” 2nd boss type zombies spawn (I am not a biologist, so I am unable to call those bulky strong blondes ‘females’, sorry) . The auto turret works like a box [that shoots ^_^] as an obstacle. turrets can help clean up bosses on wave 3 of 3 but they don’t last forever and have a long cool down to reload.


The standard rifle works fine until you get the traditional weapon of choice against zombies…the classic shot gun. Always reload by pressing “R” when the action wanes so you can be fully loaded the next time things get sporty. The next best gun is the mini-gun. Just keep its barrel cycling always. So practice tap firing every few steps even if nothing is there. Tap burst will allows the mini gun to not over heat but be ready for combat. This will help you push through a wall of zombies with less chances of getting stuck in the mob. use the number key to scroll to your weapon at the start of the round for best results. Switching to the sniper rifle is useful for taking out bosses if you are at the end of wave 3 of 3 and want to kill the bosses quicker.

Tip 4: Try to not kill boss zombies in tight walkways-


It would be unfortunate to find a fat whale of a zombie blocking your escape path down the line. If this does happens, don’t despair for they can be removed with a rocket launcher.


They have alot of health. Beating a round is less about killing and more about not being killed. You don’t need to deal with the bosses immediately to win. leaving bosses for last works well until level 20. On level 20 there is 5, so killing one if an opportunity is available is helpful because you are less likely to run into one in front of you as you run along the perimeter.


You can adjust the map level by clicking the yellow tabs on the left side after you get passed the first main menu, but before you resume your campaign if you want to play a more relaxed game.

Tip 7: Save somefin’ for the commiequeens-


Throwing grenades at bosses stuns bosses, giving you a way to put some distance from the 2nd kind of boss (who can gain on you if you tap fire the mini gun unskillfully). So saving them for boss escapes helps in later levels


Shoot the explosive cans after you run passed them. It’s basically like disabling a land mine. Think of it as a gift for future you. Make sure you aren’t in the blast radius. Blowing them up proactively prevents you from blowing them up on accident if you get to close to them when your getting swarmed/ low on life/ or blinded.

Hope you enjoy the Guide about Acquitted – Survival tips & gameplay Playthrough, if you think we should add extra information or forget something, please let us know via comment below, and we will do our best to fix or update as soon as possible!